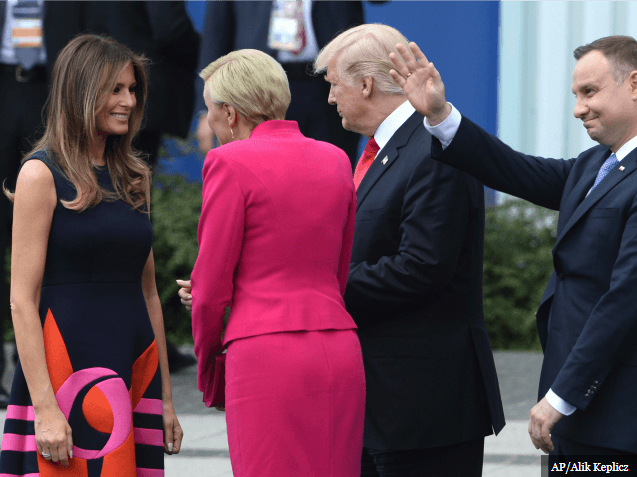 With Trump having been in Europe for the past few days both giving speeches in Poland and having meetings with other world leaders in Germany, the press had to start finding ways to attack him without attacking his pro-America message, so they went for the easiest route possible: go after his wife, Melania.

On Thursday, when both Donald and Melania went to meet the Polish president and his wife, fake news sprung up quickly that the Polish First Lady refused to shake the hand of President Trump. The rumor spread so quickly, that one of the chief witnesses felt compelled to respond to the notion, so the President of Poland, Adrzej Duda tweeted this:

Contrary to some surprising reports my wife did shake hands with Mrs. and Mr. Trump @POTUS[2] after a great visit. Let's FIGHT FAKE NEWS.

What happened here is that, to start, a CNN Editor-at-large, Chris Cillizza[4], quote-tweeted the following:

The video in question, posted below, is a deceptively edited 4-second piece of work that appeared to show the Polish First Lady snubbing Donald and moving straight to his wife.

But, because we here at Right Wing News are dedicated to not bringing you fake news, we would like to show you the full video of what happened, clearly showing that the Polish First Lady simply chose to shake Melania’s hand first, then moved on to Donald.

As reported in Breitbart[9]:

Cillizza later admitted that he knew the three-second clip he tweeted was misleading. “I know! It was a funny video of a misunderstanding! Nothing more! The same thing has happened to me a billion times!” he tweeted to a Twitter user who called him out for spreading “fake news.”

And despite the existence of the longer video clip of President Trump and the Polish first lady shaking hands, hoards of left-leaning media outlets reported that President Trump was “snubbed” and “rejected.”

Meanwhile, the fake shake was reported by the idiots at outlets such as the Huffington Post, Newsweek and Time Magazine[10].