During the election, there was a lot of scandal over Donald Trump’s refusal to release his tax returns. While it’s not required by law, traditionally every presidential candidate has released their tax returns for decades. So when MSNBC host Rachel Maddow announced that she had a copy of Trump’s 2005 returns, she thought she had a huge scoop. She was wrong[1]. 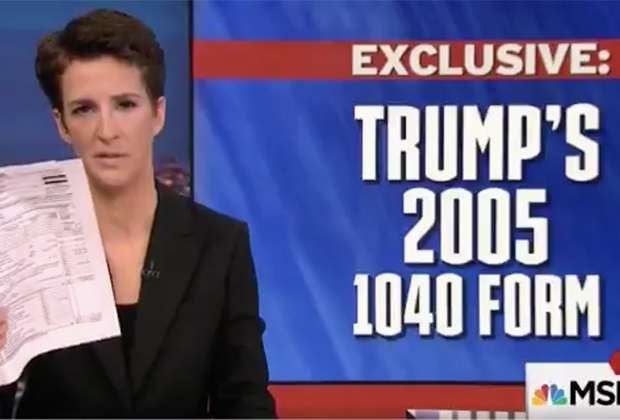 Tuesday night, Maddow tweeted out that she had the tax returns, most likely to drum up anticipation for her show:

Trump scooped her scoop, though, by releasing the tax returns himself before her show aired. And regardless of where people got their information, the verdict was almost universally clear: this was a bunch of nothing. The return showed that Trump reported $150 million in income and paid $38 million in taxes.

And Maddow has been getting slammed for it.

Thank you Rachel Maddow for proving to your #Trump[4] hating followers how successful @realDonaldTrump[5] is & that he paid $40mm in taxes! #Taxes[6]

Geraldo called, and has invited Rachel Maddow to join him from Al Capone's secret vault for her next show.

Help! Rachel Maddow's career has fallen and it can't get up!

Thanks Rachel Maddow for commitin' a felony for this info. Merica.

Ouch. That did not go the way Maddow wanted it to go.

Although, really, once she saw the tax return itself, what did she think would happen?