White House Press Secretary Sean Spicer has a contentious relationship with the mainstream media already. The liberal media is intent on pushing a specific narrative forward and Spicer gets in the way of that. And that contentious relationship came to a head when Spicer and a liberal reporter got into an argument in the middle of a press briefing. 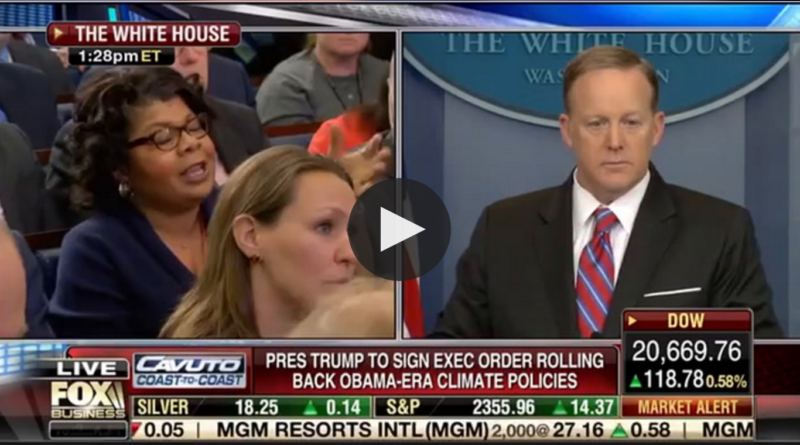 April Ryan was questioning Spicer about the alleged ties between Donald Trump and the Russian government, even though no evidence has been found to support that allegation. And Spicer had enough. “At some point, report the facts,” Spicer snapped. “The facts are that every single person who has been briefed on this subject has come away with the same conclusion — Republican, Democrat.”

As he spoke, Ryan showed her disapproval, shaking her head. And Spicer called her out on it, saying, “So I’m sorry that that disgusts you. You’re shaking your head.”

Ryan then asked a question about Trump’s relationship with Condoleezza Rice, saying Trump used a “very negative” word to describe the former secretary of state. At this point, Spicer was fed up. “It seems like you’re hellbent on trying to make sure that whatever image you want to tell about this White House stays,” he said.

“The president called her that name,” Ryan interrupted, once again shaking her head. “You’re asking me a question and I’m going to answer it, which is, the president — stop shaking your head again,” Spicer retorted.

The media, unsurprisingly, slammed Spicer for his behavior.

"Stop shaking your head again," Spicer lectures @AprilDRyan[2], who is a grown woman.

Maxine Waters & April Ryan. Today seems to be the day for Republicans to insult black women.

Sean Spicer is rude to everyone, but it's difficult to imagine him speaking to a white, male reporter the way he spoke to April Ryan today.

You can watch the video of the exchange here:

Whose side are you on in this fight?