A St. Louis Post-Dispatch Reporter is Maced After Storming a Police Station with Protesters (Video)

If you run with radicals, expect to be treated like them. You storm a police headquarters and you get maced for being part of the mob. Oh, boo hoo! This reporter should not have expected anything less. He’s lucky he didn’t get shot. Mob violence is rightfully answered to by the police with the same level of brute force. Only the officers employ a variety of methods to deter before using deadly force. You brawl with thugs and cops and my money is on the cops. Looks like that hurt a whole lot and was a painful lesson for the reporter.[1] 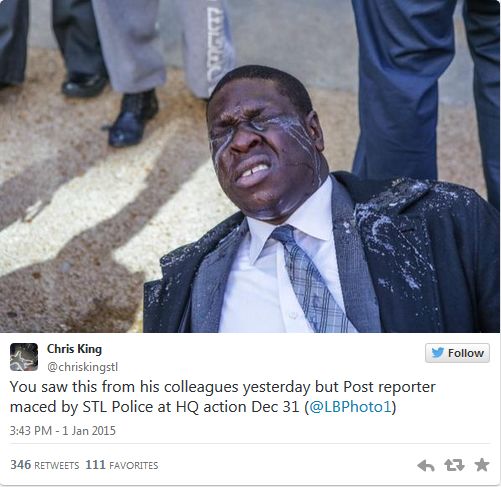 The protesters fought with police for several minutes before the police used mace to evict them from their building.

St. Louis Post-Dispatch reporter was in the middle of the brawl when he was maced and pushed out of the building. (3:24 in the video)

Maybe next time he won’t join the mob when the[y] storm the police headquarters.

The video is chaotic and profane. Lots of ‘F’ bombs and derogatory epithets thrown around. Threats of law suits and posturing that doesn’t impress anyone. Not by the police mind you… but by the grandstanding protesters. Did you expect them to just let you violently storm the police headquarters? Did these people seriously believe the police would not protect themselves? Just how moronic do you have to be to mount an offensive on a police fortress? They figured on getting their 15 minutes of YouTube fame by pulling a seriously stoopid stunt and they got thumped for it with mace. The mob got off light in my opinion. I would have expected nothing less and possibly a lot more. I give credit to the police for being restrained here with a bunch of brain damaged asshats. Hands up, I’m with stupid.