The Denver Post Said What About Duck Dynasty’s Phil Robertson

The Denver Post is at it again; this time smearing Duck Dynasty’s Phil Robertson after his victory over A&E. : Robertson was “suspended indefinitely[1]” over remarks he made about homosexuality. :  His suspension was recently lifted by A&E. : Apparently, some people at the Denver Post were irked by that decision.

The feathers are no longer flying. For now, the “Duck Dynasty” debacle is settled. The network, A&E, has welcomed patriarch and hate-speech spewer Phil Robertson back into the fold. The hiatus that was to be his punishment for homophobic and racist comments made in a GQ interview has been lifted.

So who were the winners and losers in this sad episode?

A&E, which seized the moment to attract more viewers (fans and hate-watchers, both), proved that money is the first priority in TV programming. The network wins the craven capitalism prize.

Sarah Palin and other politicians who piled on, claiming Christianity as an excuse for hate speech, win the hypocrisy award. I’m no theologian, but vile bigoted comments would seem to qualify as unchristian.

Free speech advocates and reality TV fans come out on the winning side, and really, why should a bigot be muzzled? Shine a light on the ignorance. Certainly the “Big Brother” flap proved commercial interests take care of punishment in the long run. (A modeling contract was cancelled after a contestant spouted racist and homophobic slurs inside the BB house.) It’s now up to viewers to find the “Duck Dynasty” patriarch’s comments abhorrent, and up to sponsors to decide not to advertise.

Journalistically, the winner was GQ for publishing the revealing ignorant comments in the first place.

Robertson and clan won the financial security of an ongoing reality TV show but suffered humiliation.

Haters gonna hate, but it’s better to know where the offensive hatred is located.

Yeah, Joanne Ostrow, who wrote this inane blog, obviously doesn’t watch the show — or know much about the Robertson clan. : They admit that they’re bible thumpers, they’re open about their Christianity being a foundation in their lives, and we all know what the Bible says about homosexuality.

Phil quoted the Bible and liberals react with a sense of profound discovery that the most popular book in the world labels homosexuality as a sin. : So, I think we have a case of selective reading here — and abject stupidity. : Even gay TMZ founder Harvey Levin ripped into A&E for their dishonesty over this debacle[2]. : Additionally, he noted that what Phil said is religious-based, albeit he disagreed with the content.

At the same time, this was the paper that failed to report[3] on the Arapahoe High School shooter’s political leanings since the editors felt he didn’t understand [4]what it means to be a left-winger, or something. 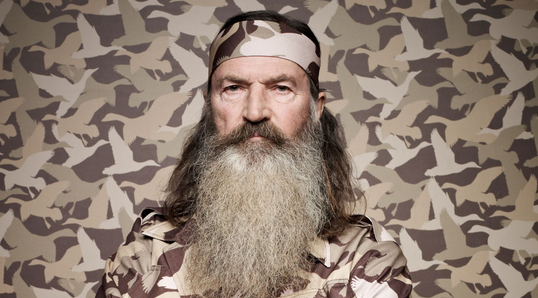