Time Magazine: Thumbs Up To Firebombing People You Disagree With!

A British satirical magazine was firebombed, likely by radical Islamic fascists, after doing an issue that mocked Muhammad. Unbelievably, Time Magazine’s Bruce Crumley responded to this attempt to shut down free speech by condoning the attacks. Yes, he tossed in some weaselly language to cover his behind, but read what he says[1] and see if there’s any other reasonable conclusion you can reach besides Bruce Crumley and Time Magazine think it’s okay to firebomb people you disagree with.

Okay, so can we finally stop with the idiotic, divisive, and destructive efforts by “majority sections” of Western nations to bait Muslim members with petulant, futile demonstrations that “they” aren’t going to tell “us” what can and can’t be done in free societies? Because not only are such Islamophobic antics futile and childish, but they also openly beg for the very violent responses from extremists their authors claim to proudly defy in the name of common good. What common good is served by creating more division and anger, and by tempting belligerent reaction?

…We, by contrast, have another reaction to the firebombing: Sorry for your loss, Charlie, and there’s no justification of such an illegitimate response to your current edition. But do you still think the price you paid for printing an offensive, shameful, and singularly humor-deficient parody on the logic of “because we can” was so worthwhile? If so, good luck with those charcoal drawings your pages will now be featuring.

…Editors, staff, fans, and apologists of Charlie Hebdo have repeatedly pointed out that the paper’s take-no-prisoners humor spares no religion, political party, or social group from its questionable humor. They’ve also tended to defend the publication during controversy as a kind of gut check of free society: a media certain to anger, infuriate, and offend just about everybody at some point or another. As such, Charlie Hebdo has cultivated its insolence proudly as a kind of public duty–pushing the limits of freedom of speech, come what may. But that seems more self-indulgent and willfully injurious when it amounts to defending the right to scream “fire” in an increasingly over-heated theater.

…So, yeah, the violence inflicted upon Charlie Hebdo was outrageous, unacceptable, condemnable, and illegal. But apart from the “illegal” bit, Charlie Hebdo’s current edition is all of the above, too.

Using the exact same logic, wouldn’t people offended by Bruce Crumley’s cowardly and painfully stupid column be justified in firebombing his house? Then, of course, people could note that while it is too bad that happened, Crumley deserves no sympathy because after all, he baited people into it with his obnoxious and offensive opinion.

Let me just add that if that Charlie Hebdo edition counts as baiting Muslims, then pretty much every other group in society from Christians to Southerners to Mormons to conservatives to liberals to Indians to Catholics to Italians, etc., etc., etc., is regularly baited, too. That leaves us with two options: Either we dramatically censor everything we say so as to offend no one or we censor what we say in regards to Muslims out of fear. Neither option is acceptable and Bruce Crumley’s seeming willingness to embrace the latter speaks poorly of his character. 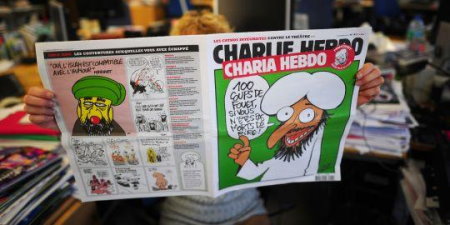