Tucker Carlson has made a name for himself taking on liberals each night on his show, yet they still keep coming back for more pain. The latest example is a liberal protest organizer who wants to force Donald Trump and Mike Pence out of office… and Carlson laughed right in her face[1]. 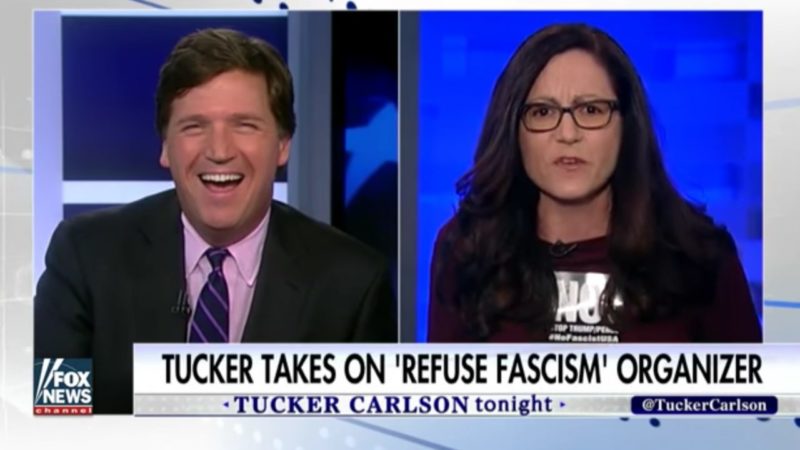 Sunsara Taylor works with “Refuse Fascism” and wants to oust the Trump administration because “the future of humanity and the planet” depends on it. Why? Because Trump is just like Hitler. “Humanity is facing an emergency,” Taylor said. “Trump and Pence are operating out of Hitler’s playbook, only they have nuclear weapons.”

If Trump was really like Hitler, then shouldn’t Taylor be committing acts of violence to stop him?, Carlson asked her. But Taylor didn’t get the point at all, and just kept doubling down. “[Trump] is more dangerous than Hitler ever could have been,” she claimed.

So, what is she going to do to stop him? “I’m calling for mass political protests and resistance, building on what’s already happened and staying in the streets — in the name of humanity,” she explained. She then took aim at Carlson himself. “I know you like to carry water for the liar in chief,” she said. “I know you like to justify and rationalize the sexual predator in chief.” Carlson laughed in her face.

He then asked her what kind of substantive action she was planning to take, if Trump really was just as bad — or worse — than Hitler. “But what are you going to do about it Sunsara? That’s my question — other than jump around in the street with a sign in your hand and write your little manifesto,” he asked.

“You don’t oppose fascism with political resistance,” he concluded.