Donald Trump doesn’t have a good relationship with most of the mainstream media, but his dealings with CNN have been especially contentious. CNN has slammed Trump for what they say is attacking the media; Trump criticizes CNN for forwarding fake news. But things got even worse after a tweet Trump sent out targeting CNN, leading CNN to start making some pretty serious accusations. And now, Tucker Carlson is taking aim at CNN in response[1]. 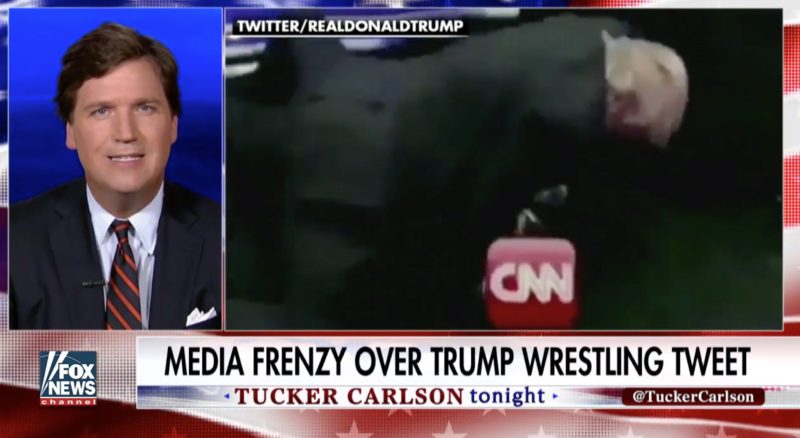 It all started when Trump tweeted out a video that showed him wrestling on Wrestlemania, except a CNN logo had been photoshopped onto his opponent’s head.

CNN responded by saying that Trump was encouraging violence against reporters:

Monday night, Carlson spoke about the controversy on his show, “Tucker Carlson Tonight.”

“Donald Trump’s feud with the media got even weirder and more intense over the weekend after the president tweeted a video of his staged brawl with wrestling mogul Vince McMahon with a CNN logo superimposed over McMahon’s face,” Carlson began. “It was a little confusing since CNN and pro wrestling could not be more different. One is an entertainment venture that promotes over-the-top fictional narratives and rigs its fights. The other is the WWE, but whatever. There’s a word for this. It’s called trolling, the digital version of getting someone’s goat. Should the president take time from running the free world to drive the media insane? Maybe not. Probably not. But he obviously enjoys it quite a bit.”

“CNN’s media critic Brian Stelter argued that the video is so offensive, that we ought to suspend the free expression and censor the president’s speech, at least on social media,” he continued. “It’s kind of an odd argument for a journalist to make, but there you have it.”

And while CNN is now pretending that they care about lives being in danger, Carlson wasn’t buying it, pointing out that they weren’t concerned when Bradley Manning — who now goes by Chelsea — leaked classified documents that endangered the lives of CIA agents. Carlson alleged that they didn’t care because it didn’t personally affect them, saying, “So few reporters care, it was not about them, so it was not that interesting.”

Do you agree with Tucker Carlson?