Juli Weiner of Vanity Fair may have thought she was being “clever” with her Nov. 1 blog post[1], but instead she looks by turns blindly partisan, foolish, ignorant of facts, childish, and lacking even a tiny bit of knowledge about men’s headwear when she compared Herman Cain to disgraced lobbyist Jack Abramoff as well a the character Daniel Plainview from the movie There Will Be Blood. All because they each wear a hat!

It is the weakest of hooks upon which to hang a hat, but the fact that there are photos of the three folks in question wearing a hat seems to be enough for Weiner to go off half cocked somehow imagining they all have something in common.

Here is her prosaic post in its less than worthy entirety:

These three men have more than just a hat stolen from a Lego man in common: Abramoff is the founder of several overpriced Washington, D.C., restaurants; Cain is the former C.E.O. of the execrable pizza chain Godfather’s; and Plainview’s well-known milkshake catchphrase remains popular on T-shirts to this day. 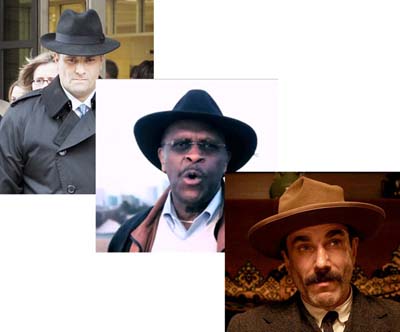 You have to read something by Paul Krugman to get so much that isn’t so jammed in but two tiny paragraphs!

Firstly, Cain is not “reviled.” In fact he’s leading in the polls all across the country right now.

Secondly, Cain has been wearing that same hat for almost a decade. There are photos of him wearing that hat years ago at Tea Party events all across the country so it is nothing “recent” at all.

Thirdly — to show her lack of knowledge about haberdashery — Cain’s hat is simply a cowboy hat and has nothing to do with a funeral. I don’t know about you, but I’ve never heard of cowboy hats being associated with funerals!

Fourth, the hat that Jack Abramoff worse was a proper fedora, not a cowboy hat so Jack’s isn’t “similar” to Cain’s.

Fifth the Plainview hat in the movie is nothing at all like either Abramoff’s or Cain’s. But his photo was only picked so this hack could include a “sociopath” in with Abramoff and Cain in order to link them both to a murderer.

Lastly, if her second paragraph was meant as humor, her idiotic food link so tenuously applied to the three was empty of mirth.

Sadly, the only reason for this was to smear Herman Cain with a substance free link to a sociopathic killer — and a fictional one I might add. It was also just an excuse to call names. In these few words she called Cain a sexual harasser with no proof of same, called his work “execrable,” called him “reviled,” linked him to both a sociopath and a convicted criminal, and liked him to funerals!

All because he wore a hat!

This Weiner should be ashamed of herself for this stupidity. And wasn’t Vanity Fair supposed to be “intellectual” fare? Certainly Vanity Fair should also find shame in such empty name-calling.