VIDEO: Duck Dynasty’s Sadie Robertson Shares Her Faith, Her Family, and Her Dancing Skills, and Earns a Near Perfect Score

Anytime there’s a conservative or Christian person on Dancing With The Stars, liberals inevitably lose their minds in fits of rage, because the object of their contempt usually ends up being pretty successful on the show. Sadie Robertson is the latest person on the show to be outspoken about her faith, and after a touching tribute to her family and her faith, . 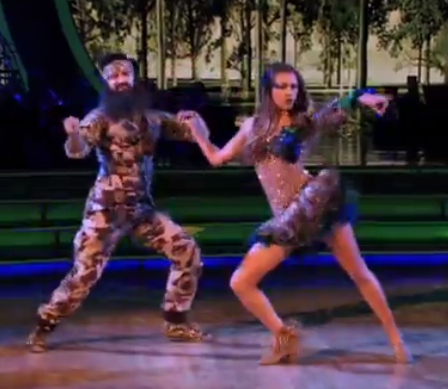 On Monday night’s Dancing with the Stars, more members of the Duck Dynasty family were involved in Sadie Robertson’s performance. Prior to breaking out in dance to a duck hunting inspired samba, Sadie’s dance partner Mark Ballas, camoflauged in duck hunting gear, was in a duck blind type area along with Sadie’s dad Willie and her uncles Jase, Jeb, and Si. The Robertson men were doing their infamous duck calls.

The music begins and Sadie and Mark dance to a specialized version of Pharrell’s ‘Hunter’ and earned a near perfect score of 37 out of 40. The dance is phenomenal, but just as amazing is the open and honest tribute to her faith and family by Sadie in the video leading up to her performance. She talks about her family’s Duck Dynasty journey including how their faith is the center of who they are, and stands up for her grandpa, Phil, as she discusses how difficult it was when the media attacked him last year.

Liberals hate the Robertsons because they dare to be outspoken Christian conservatives. Unfortunately for them, Sadie has seemingly won the hearts of America on Dancing With The Stars, as her personality, faith, and conviction endear her to viewers just as much as her spectacular dancing does.