Give me a freaking break.[1] Seriously? Buzzfeed has a new viral video out that shames people for being white. They rounded up a whole bunch of people of color and asked them to respond to the word “White.” It is meant as a racial guilt trip against whites and especially white males. Per InfoWars, the video even features a child who asserts that white people “don’t acknowledge what has happened in the past,” which I assume refers to slavery. The fact that virtually every race in history owned slaves, that white people were the first to end slavery or that over one million white Christian Europeans were enslaved in North Africa until the middle of the 18th century under the Barbary slave trade isn’t mentioned. They also didn’t mention the fact that the first slaves in America were white indentured servants. This is another racist slap at white America and another pot shot at getting wealth redistribution through reparations. 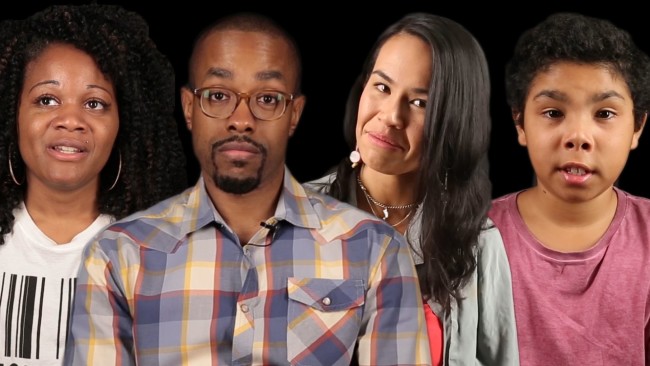 A new Buzzfeed video going viral on YouTube features people who are “triggered” by the word “white,” characterizing white people as arrogant, controlling and selfish.

Entitled People Of Colour From Around The World Respond To “White” – the clip is a three minute guilt trip intended to shame Caucasians into acknowledging how oppressive they are for having been born with the wrong skin color.

Asked to respond to the word “white,” the non-white participants deliver a number of pejoratives, accusing whites of being controlling, privileged, arrogant, naive, selfish, and obsessed with power.

At the very end of the clip it states that it doesn’t matter what skin color you are… unless of course you are white. This video is the latest installment of a new breed of racism being advanced by the regressive left which attempts to shame white people for having the wrong skin color. If you are white, you are privileged, according to these morons. I’ll say it again, skin color has nothing to do with succeeding. Neither does gender. It’s talent, hard work, determination and perseverance that gets you there… not being male or white. Liberals will blame anything and everyone but themselves for their circumstances. And I’m sorry… whites can claim racism. It’s happening more and more in the US against whites and it is sanctioned by our own government. Liberals assert that racism is only racism if it’s backed by institutional power. But like everything else, racism knows no single skin color.