The left has been having a field day with accusations that Donald Trump, Jr. had improper meetings with a Russian lawyer who said she had information about the Hillary Clinton campaign. But not everyone is falling for it. Judge Jeanine Pirro slammed the critics and pointed out the little secret liberals don’t want anyone to hear[1]. 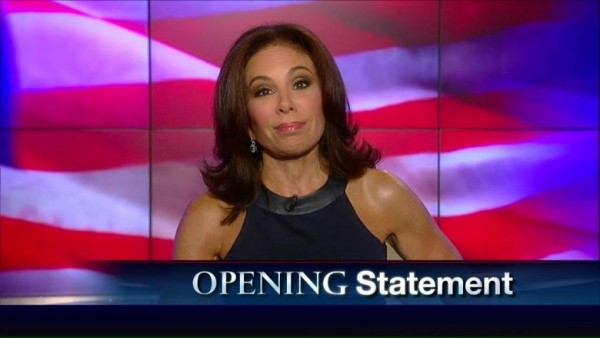 Judge Jeanine spoke out during the opening statement for her show on Saturday, saying she would “take the next trolley to Hell” to meet with the devil himself if Mephistopheles told her that he had campaign information on her opponent that could help her win. “As someone who’s run for office five times, if the Devil called me and said he wanted to set up a meeting to give me opposition research on my opponent I’d be on the first trolley to Hell to get it,” she said. “And any politician who tells you otherwise is a bald-faced liar.”

She also argued that Donald Trump, Jr. did not actually break any laws in meeting with the Russian lawyer. “There is no law that says a campaign cannot accept information from a foreign government,” she pointed out. But she didn’t just defend Trump, Jr. — she also pointed out that the left has a nasty little habit of colluding with Russia, too.

Barack Obama had a close relationship with Russia, she claimed, and brought up his decision to “put the fox in charge of the hen house” by letting Russia take the lead on eliminating chemical weapons from Syria — a horrible decision that has wildly backfired. “So folks, it’s Barack Obama who’s pals with Putin,” she said. She also pointed out that Obama had no problem meddling in foreign elections, spending almost $350,000 to see Benjamin Netanyahu defeated in the 2015 Israeli presidential election.

You can watch the entire segment here:

Do you agree with Judge Jeanine Pirro?