It’s no surprise that CNN — and most of the mainstream media — has a liberal bias. But that doesn’t mean that there isn’t a point that takes it too far, even for them. When one Democrat appeared on air, he found out firsthand that a liberal bias doesn’t equal carte blanche to just say whatever he wants. Sen. Chris Murphy took it too far and he got smacked down hard[1]. 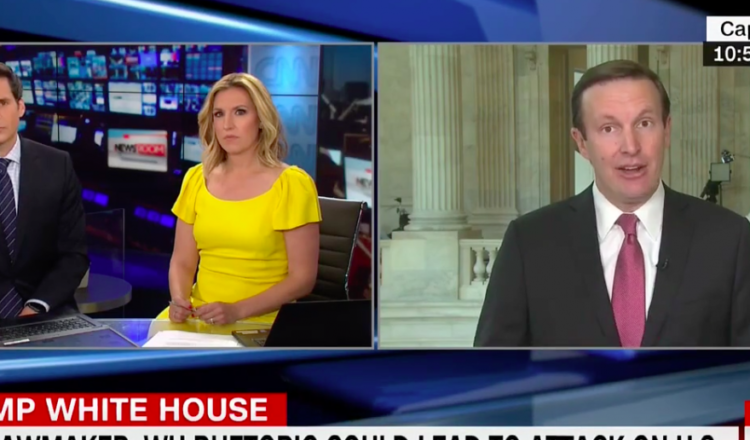 Murphy responded to the Manchester terrorist attack by claiming that Donald Trump’s supposed rhetoric about Muslims will lead to more terrorism, causing dismay from CNN anchor Poppy Harlow. “You said, ‘Many of us are worried about the rhetoric from the Trump administration because we worry that combined with the robust online recruitment it mind end up in an attack like this,’ talking about Manchester, ‘on the United States,'” Harlow said. “Are you saying that you believe the rhetoric of the president makes this country more vulnerable for a terrorist attack right now?”

Murphy answered in the affirmative, responding, “I am saying that.”

John Berman also responded incredulously, asking why it is, then, that there were so many terrorist attacks in the United States while Barack Obama was president, despite using “far different rhetoric.” Murphy, unsurprisingly, didn’t answer, but dodged the question instead.

But the CNN hosts weren’t ready to let the issue drop yet. Harlow kept questioning Murphy, asking if Murphy still believed that Trump’s rhetoric was “dangerous,” even after his much-lauded speech in Saudi Arabia this week. But still Murphy refused to budge.

“It doesn’t cancel out all of the terrible things he’s said about the Muslim religion in the past,” he said, laughing.

It’s not often that conservatives praise CNN, but they did a great job here pushing back against some truly unbelievable insanity. Murphy really should rethink his position, because when even CNN is telling you that you’ve taken it too far, that’s a sure sign that you’ve crossed the line into some serious liberal extremism.