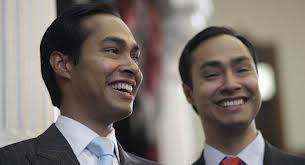 [1]While most Americans are celebrating Memorial Day Weekend and giving thanks to those that sacrificed their lives for freedom and liberty, the President just nominated a cabinet member who if confirmed by the Senate could one day possibly be more of a threat to freedom and liberty than The President himself.

That man is current Mayor of San Antonio Julian Castro. Why did the President nominate this man to become our next Housing and Urban Development Secretary? Why is he so dangerous? Who is Julian Castro?

Julian Castro, along with his twin brother Joaquin have been born and bred to be Socialist Revolutionaries by their radical activist mother, Rosie. Their mother was a well known radical leftist community organizer in Texas in the 1970’s.

Their mother was one of the original founders of one of the most radical separatist groups in the world, The National Council of La Raza. La Raza literally means, “the race.”

On the surface this organization seems like as they say on their own website a non-partisan community outreach group. They claim there main focus is to improve the health, well being, and education of Hispanic Americans. But, just like the Council of Islamic Relations, which claims almost the same things but for Muslims, there hides a shadowy past and a true objective.

The NCLR is one of the largest open border advocacy groups in America. They oppose any type of immigration control and are a huge lobbying force in Washington, DC. The NCLR has spent millions and millions of dollars on get out the vote operations in all 50 states, and have given millions of tax payer funded dollars to most Democratic candidates and other Pro-Amnesty groups along with many pro-Amnesty Republicans.

But this alone is not the reason why they are so dangerous. It is the radical leftist front group known as “Movimiento Estudiantil Chicano de Aztlan or Mecha for short.

Mecha is an anti-American radical youth movement and the radical political arm of La Raza. Their main objective is to forcefully take parts of California, Arizona, New Mexico, and Texas away from the Southwest and create a new Country known as Aztlan.

Here is a statement from the group on the University of Oregon’s Mecha chapter website:

“Chicano is our identity. It defines who we are as a people. We reject the notion that we should assimilate into the White Anglo-American melting pot. Aztlan was the legendary homeland of the Aztecas. It became synonymous with the vast territories of the Southwest that were brutally stolen from the Mexican People. Aztlan belongs to those who plant the seeds, water the fields, and gather the crops, not to the foreign European invaders. We are Aztlan. For La Raza Todo, Fuera de La Raza nada.” The last ending sentence translates to, “For the race everything, for outside the race nothing.”

So what makes this man so dangerous?

Julian Castro and his twin brother Joaquin, born one minute apart and on Mexican Independence Day were raised to be revolutionaries literally from the moment they could walk and talk. Their bedtime stories were not Mother Goose stories or Nursery Rhymes; they were songs of revolution. They were taught by their activist mother that activism was the only way to make a difference. They were instilled with the values of separatism, racism, and anti-White hatred. Their mother even named Joaquin after a character in an anti-Gringo poem titled I am Joaquin.

Let’s take Julian Castro’s own words about his mother as proof:

“My mother’s rabble rousing and political activisms were like war cries ringing in my ears. She would say things like, Viva La Raza! Or Brown and Black unite! My mother’s fervor for activism was instilled in my brother and I at a very young age and has shaped and molded the people we are today.”

Nothing the left ever does is by accident or coincidence. This is what makes them so dangerous. This is why Barack Obama gave the key note speech at the 2004 Democratic National Convention. It is also why Julian Castro gave the Keynote speech at the 2012 Democratic National Convention. Their similarities are frightening. They both were raised by a single mother. They both went to Harvard Law School. They both shot up to prominence from relative obscurity. None of that is a coincidence.

So why was he appointed?

The reason I believe Julian Castro was appointed to be the Next HUD Secretary is because the Obama Administration knows privately that Hillary Clinton might not survive the Benghazi scandal. They needed a back up plan and they needed it fast. Julian Castro has been groomed along with his Congressman Brother to be the new radical baby faces of the Democratic Party. These two brothers if not exposed for their radical motives and ties will make Barack Obama look like Ronald Reagan.

At the very least Julian Castro could be the next Democratic Party’s Vice Presidential Nominee. He would be an Electoral College Godsend immediately putting in play every single swing state. These two brothers if allowed to run roughshod over America and the Constitution could do more damage to this Country than Fidel and Raul could ever dream of.

Julian Castro may seem to be a harmless, baby faced well spoken and charismatic young man to most but so was Ted Bundy. He and his Brother are power hungry ambitious closeted radicals just waiting to unleash their ideology on an unaware, unprepared, and battered down American populace.

Please help spread the word about these two and make folks aware of who they are and what they represent. If we allow the liberal media to define them we risk allowing another radical worse than Barack Obama to one day be president. Like the leftist media did with Obama they will surely do with Julian Castro. They will paint Conservatives as racists whenever we tried to expose a candidate’s radical ties, so we might as well ignore the attacks and expose the truth. If we don not expose them now America could soon be the next Country in the world ruled by two brothers named Castro.

Suggested by the author

Common Core is the common whore of education

Why our Southern Border will never be secure