Why Newspapers Are Dying: The Ann Coulter Edition

Townhall[1] is the big league of conservative punditry. All of the A-List conservative columnists, with the exception of perhaps Mark Steyn, Karl Rove, : and : Peggy Noonan write for them. Thomas Sowell, Walter Williams, Michelle Malkin, Charles Krauthammer, Mike Adams, George Will, Jonah Goldberg, Victor Davis Hanson : — they’re all at Townhall, along with a lot of other top notch pundits.

So last night, I took a look at the 5 most popular columns for the last 30 days on Townhall. So, which of those incredibly talented columnists made the list? Actually, as of last night, none of them: 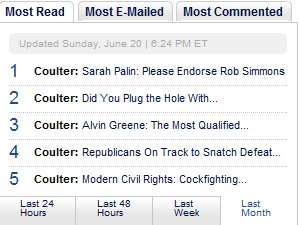 Now, it’s no secret that Ann Coulter[2] is an extremely popular columnist, but that’s a level of domination you seldom see from anyone not named Michael Jordan, Greg LeMond, or George S. Patton.

But, it also reminded me of something Ann Coulter said in my 5th interview with her[3].

There are newspapers all over the country going out of business today and that brings up a question. From what I have seen, no insult meant to Mark Steyn, Charles Krauthammer, Thomas Sowell, etc., but you seem to be the single most popular columnist in America with conservatives. So, how many papers run your column?

Thank you for noticing! And thank you for reminding me of the devastating collapse of the newspaper industry. I love a happy ending!

The only newspaper big enough to be on Nexis to carry my column is my home newspaper, Human Events, which was also Ronald Reagan’s favorite newspaper. If that’s how the newspaper industry treats the author of seven massive New York Times bestsellers – including one that was a collection of the columns most newspapers were refusing to publish — how can any bright young conservative writer expect to be published?…

So, there you go. A woman whose last 5 columns were the 5 most popular columns at Townhall for an entire month can’t get mainstream media outlets to carry her column. Yet, you have journalists all across the country griping that no one wants to read newspapers anymore. Well, when you’re completely indifferent to what your customers want, it’s no shock that they’re not interested in your product.