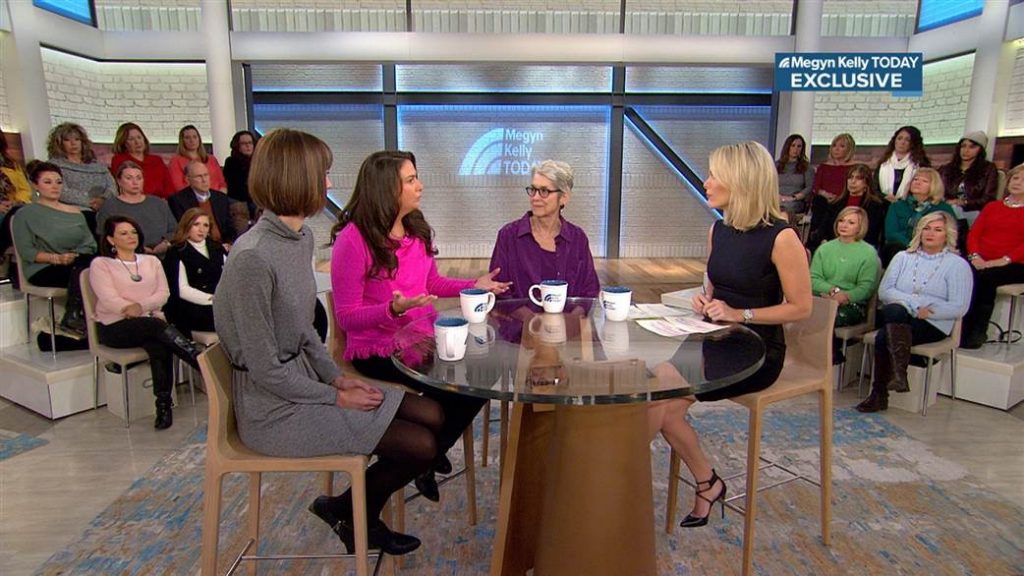 Three women who were part of the Democrat show to discredit Donald Trump on his road to the White House, started their day speaking to Megyn Kelly before moving on to a left-wing press conference where their real motivations for accusing the President of sexual harassment became very, very obvious.

Megyn Kelly welcomed three women, Samantha Holvey, Jessica Leeds and Rachel Crooks, to the Today Show to discuss their claims about alleged sexual abuse and harassment. The three women had already made rounds in the press, but with the release of a new documentary, they’re back on the road to make sure they attract attention. The interview with Kelly started off fine, with a backdrop of Concerned Female Audience Members clearly visible on stage as the women recounted their poorly verified stories.

Samantha Holvey is a former Miss North Carolina who alleged that Trump had ogled her while she was “indecent” backstage at a 2006 event he was directing, saying that she was “just a piece of meat” to him.

Jessica Leeds says Trump had hands like an octopus when she was seated next to him in first class on a flight when she was 38.

Rachel Crooks alleges that the now-President kissed her without her consent in one of his office buildings.

A few days ago, Megyn Kelly mourned the loss of her “friend” and “supporter” Matt Lauer[2] from the NBC network, praising his kindness after he was let go for long standing, well-documented sexual harassment claims.

While the interview was still live and airing, the White House quickly put out a statement:

“These false claims, totally disputed in most cases by eyewitness accounts, were addressed at length during last year’s campaign, and the American people voiced their judgement by delivering a decisive victory.”

After appearing on Megyn’s show, the three women went on to sit at a press conference held by Brave New Films to answer questions for reporters. The documentary film company, whose mission is to “champion social justice issues” by using media, education and “grassroots volunteer involvement,” just came out with a film entitled 16 Women and Donald Trump, reporting the stories of sixteen women who accuse Trump of various types of sexual assault.

During the press conference, Crooks said that the “only reason I am here today is because this offender is the President of the United States,” saying that she wants to believe that Americans can put aside their politics to listen to her unverified story.

Bill Clinton still walks (shuffles?) freely about, despite the allegations of his sexual misconduct while he was in office with an intern who provided physical proof. But Trump, having allegedly assaulted women years ago while still in business, with no credible proof beyond the claims, must be punished.

Holvey argued that this isn’t a “partisan issue,” because women are mistreated every day, except they were allegedly treated badly years ago. But now that Trump’s in charge, they think it’s a great time to pipe up. Not political at all!

The other day, after the interviews and press junket with the three women ended, Juanita Broaddrick wrote her own small piece on Twitter, explaining why she supported Trump:

Why did I support President Trump? I was raped by Bill Clinton & threatened by Hillary Clinton. I supported the one person who I believed had the chance of preventing my rapist and his enabler from being sent to the White House and back in the seat of power.

And if the stories of the three ladies are true, then they’ll hold up in court. Too bad they’re too busy shilling a movie instead of looking for justice.