After Backlash For Wearing High Heels In Houston – Melania Wears Hat With A Message For Her HATERS! [VIDEO]

People are dying[1] in Houston and the surrounding areas and what does the media fixate on? Melania’s heels. SMH. The media ran with it relentlessly yesterday, pointing out how out of touch Melania was. Except she’s not. As Tammy Bruce astutely pointed out, Melania is one of those women who always dress precisely for that moment and have incredible fashion sense to boot. Leaving the White House, Melania wore high heels. But when she got on the plane, she changed into tennis shoes for Texas.

Way to try and make absolutely nothing into something. It’s ridiculous. Commentators breathlessly asked how effective Melania could be in flood-ravaged Texas while wearing 3-inch-high stilettos. The morons didn’t wait to see what she was wearing as she landed in Texas. Man, they are just looking for any little thing to nail the Trumps on. It’s disgusting. Imagine that… Melania has more than one pair of shoes and she changed her outfit on the plane. Suckers. 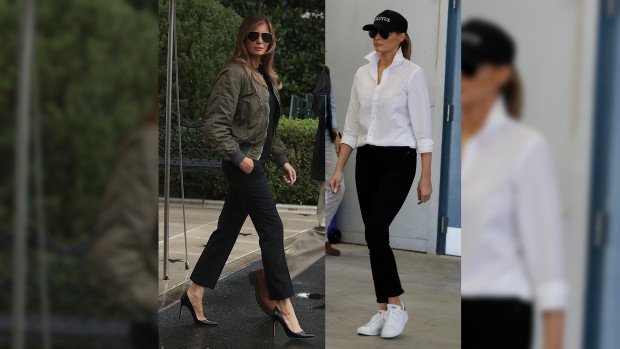 Today, one of the more absurd political firestorms in recent memory occurred as Melania Trump exited the White House wearing high heels[3] on her way to visit flood victims in Texas. Many commenters online asked how effective Melania would be in the disaster area while wearing 3-inch-high stilettos:

And here we have Melania Trump modeling what NOT to wear to a hurricane: 5-inch stilettos.

How out of touch can you be? pic.twitter.com/tZR8o3dYxY[4]

However, to the shock of many in the commentary industry, the first lady seems to own more than one pair of shoes. While departing Air Force One in Corpus Christi, Texas, Melania can be seen wearing a white pair of sneakers. According[6] to previous Independent Journal Review reporting:

However, after all the mocking, the first lady emerged from Air Force One in a completely different outfit — one that she likely packed for when they touched down in flood-ravaged Texas.

It wasn’t just her shoes, though, that sent a message when Melania stepped off the plane in Texas. Melania wore something we had not seen previously: a FLOTUS hat. FLOTUS stands for ‘First Lady of the United States.’ Melania wore a black hat with white letters across the front. She wore it for the duration of her time on the ground in Corpus Christi.

Melania also wore a hat that had FLOTUS proudly emblazoned across it. This is a woman who while wearing a ball cap, shades, a simple white blouse, black slacks and sneakers looks elegant enough for a model shoot. She’s stunning. And every time the media sees her, it triggers them. Michelle Obama compared to Melania Trump is like night and day… and no that’s not racist. I thought the FLOTUS hat was a very nice touch.

Contributing fashion writer Lynn Yaeger of Vogue infamy was triggered big time and claimed that this administration can’t get anything, even a pair of shoes, right. Uh yeah… that woman looks like a nightmarish clown[7] and she has no idea what she is blathering about. These people are nuts and they are hatemongers. Melania puts every one of them to shame… whether she’s in sneakers OR stilettos. 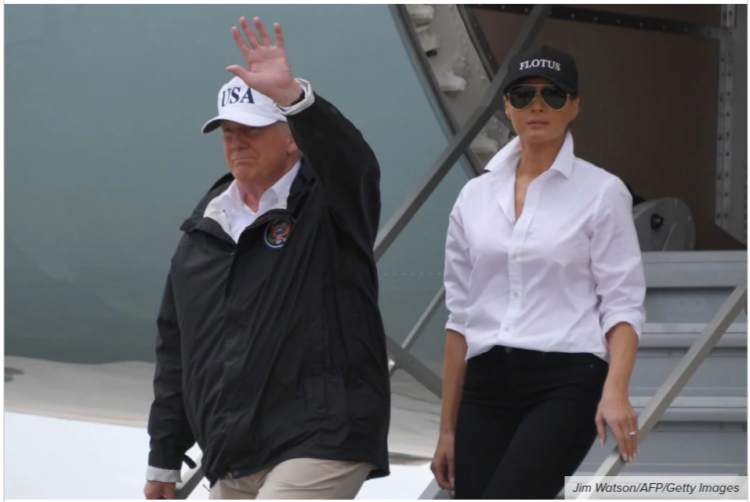