Michelle Ruined School Lunches. Now, Melania is Calling For The End Of… [VIDEO]

I wrote a bit on this yesterday[1], but I think this deserves a bit more examination. While Michelle Obama gave our children unpalatable lunches and tried to control everything they ate, Melania Trump is addressing something much more substantive. This will most likely become Melania’s cause as First Lady – she is calling for the end of violence and oppression against women, specifically in regards to Shariah law. She’s also promoting the empowerment of women. This is a good choice as a cause and one where Melania can leave her mark.

She spoke at the State Department’s International Women of Courage Awards, where a number of women who had sobering stories to tell spoke. These are women who have survived horrific abuse or oppression and have overcome their hurdles to make their lives and other lives greater. Islam is the greatest abuser of women on the planet currently, but there are others. The caste system in India for instance is just one that harms women. Then you have dictatorships and communism across the globe. White slavery and trafficking of women is something that affects every nation on earth. Melania won’t lack for material for her cause and it is one that touches the hearts and souls of women everywhere. 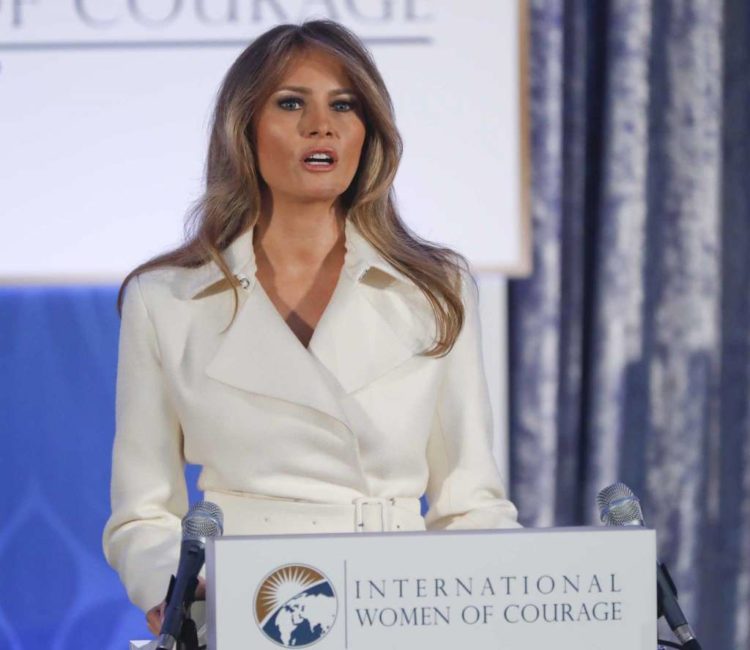 When Michelle Obama was first lady, her main accomplishment was making America’s school lunches[3] as unpalatable as possible. Melania Trump seems to be interested in something a little different.

According to CNN[4], the first lady issued a call to end violence and oppression against women[5] during remarks at the State Department[6] on Wednesday.

The remarks came at the State Department’s International Women of Courage Awards, which honor women who have suffered and overcome injustices “from domestic violence to environmental disaster to gender bias to acid attacks,” CNN reported.

“Together, we must declare that the era of allowing the brutality against women and children is over while affirming that the time for empowering women around the world is now,” Melania Trump said.

“We must continue to work towards gender empowerment and respect for people from all backgrounds and ethnicities, remembering that we are all members of one race — the human race.”

I am not a feminist. Never have been. But I have always believed that men and women were equal and that all voices matter. We are all humans and therefore, all imperfect, but we all should be respected for our individual opinions. There is no room in a civilized world for racism, violence and hatred against women. They are not chattel or property… women are half of what makes the human race great.

Melania also called on young women around the world to take the honorees as role models to fight oppression. “As you go forward, remember their journeys as you push ahead and strive to bring about a better community, a better country, and a better world in the ongoing fight for right over might,” she said. It’s hard for American women to understand what it is like for a woman to suffer in a communist country and to fight to overcome sexism, abuse and oppression. Melania is the face of that struggle even though she grew up in a privileged family. She knows the realities of communism. I love this quote: “We must continue once again to shine the light on the horrendous atrocities taking place in neighborhoods around the corner and around the globe where innocent families are crying out to live in safety. We must continue to fight injustice in all of its forms, whatever scale or shape it takes in our lives.” It reminds me of Chicago.

As a cause for the First Lady to address, this is a truly inspiring one. It sure beats the heck out of making school lunches inedible for our kids. It’s also a cause to be taken seriously.