Abortion VS Gorilla Death in One BRUTAL Meme [VIDEO]

When a gorilla is more important than human life, maybe people need to take a look around a re-evaluate their priorities. 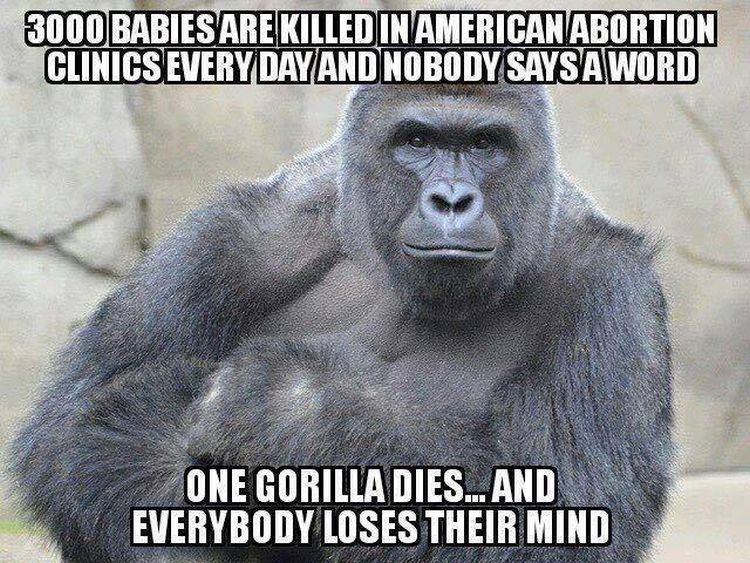 Television changed everything. Americans turned against Vietnam when they saw the images on television. However, too few people are willing to look at images detailing abortion procedures. When people were shown the below video, they changed their minds on the issue[3]. Check it out and share this important video.

When faced with the reality of the abortion procedure, many people who are pro-choice change their minds instantly. A video put out by Live Action shows former abortionist Dr. Anthony Levantino describing and showing the process of a second-trimester (13-24 weeks of pregnancy) surgical abortion procedure. Dr. Levantino has preformed over 1,200 abortions and explains in detail how babies are ripped apart limb by limb in these procedures.  Live Action approached people on the street and asked them if they were pro-choice. To those that said yes, even up to the point of birth, they showed Dr. Levantino’s video of the procedure. After watching the video, the people who claimed to be pro-choice changed their minds on the spot. They admitted they were unaware of how developed babies are at this point in pregnancy and described the video as “inhumane.”

America’s views on life are changing for the better as science and technology reveal the fascinating stages of life babies progress through from the moment of conception. Videos like this one are helping to change the debate and show uninformed individuals what it is they actually profess to believe in when they say they support pro-choice policies.  Seeing the reality of abortion on it’s face makes people — like those in this video — oppose it outright. Exposing the brutal inhumanity of the abortion procedure may be the most powerful way to change minds and stop this tragic holocaust of children.

The left is proud of themselves for undermining the Vietnam War. They tout that because of television, Americans were able to see the carnage of war themselves and that helped change perspectives. By that logic, they should welcome seeing the truth about abortion. Instead, the left tries so hard to suppress the truth about what occurs during the murder.

Share this around. If people are so okay with abortion, they should be willing to see what happens during the procedure.