Hillary is such a lying liar, I honestly can’t believe that anyone would vote for her. She’s just a sorry excuse for a human being. 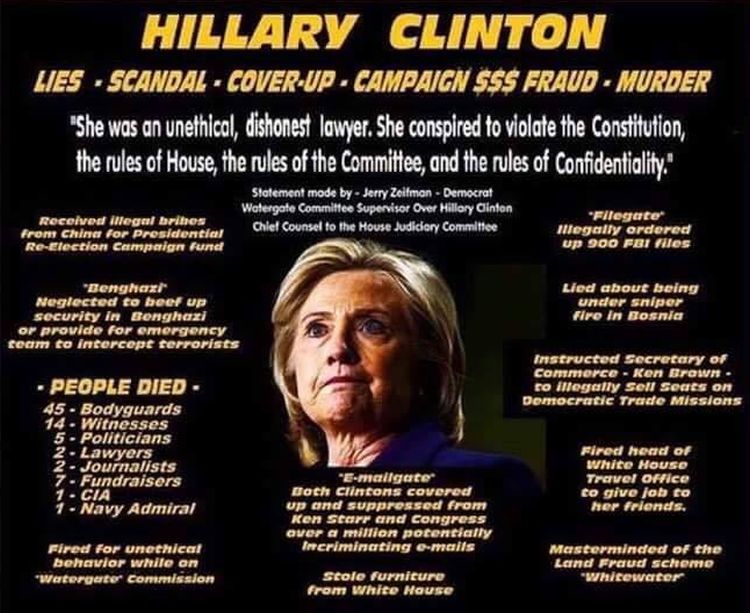 Remember the freakout over the release of Valerie Plame’s name as a CIA agent? Even though Joe Wilson featured her name and employer on his Who’s Who page, it resulted in a massive investigation, which went on for years past when the special prosecutor knew who the leaker was, and liberals wanted Karl Rove frog-marched out of the White House in handcuffs, often along with Dick Cheney and George W. Bush. What do they think of Hillary?

Federal records reveal that Clinton swapped these highly classified names on an email account that was vulnerable to attack[4] and was breached repeatedly by Russia-linked hacker attempts.[5] These new revelations — reminiscent of the Valerie Plame scandal during George W. Bush’s tenure — could give FBI investigators the evidence they need to make a case that Clinton violated the Espionage Act by mishandling national defense information through “gross negligence.”

Numerous names cited in Clinton’s emails have been redacted in State Department email releases with the classification code “B3 CIA PERS/ORG,” a highly specialized classification that means the information, if released, would violate the Central Intelligence Act of 1949.

The State Department produced a document[6] to Judicial Watch in April 2014 that identifies different types of “(b)(3)” redactions, including “CIA PERS/ORG,” which it defines as information “Specifically exempted from disclosure by statute … Central Intelligence Act of 1949.”

There are quite a few examples available at the Breitbart article of this conduct, which occurred via a server that was set up in violation of State Department policy, as well as federal record keeping laws and national security laws. She was told not to do it. Yet, she still did. She, and the people who worked for her at the time, some of whom still do, put national security at risk in willful defiance of federal law.

Be honest, Liberals: if Hillary was a Republican, you’d be calling for Hillary to be prosecuted. You’d be demonstrating. You’d be screaming it to the news media. All the leftist groups would be constantly advocating for the prosecution of her and her associates. If you’re honest with yourself, you know that’s true. You have a lady running for POTUS who willfully blew off the national security for her own convenience.