Capitalism VS Socialism Compared in One Brilliant Meme

Liberals LOVE to whine about Capitalism – but is it so bad, really? Let’s compare what happens in a socialist and in a capitalist society. 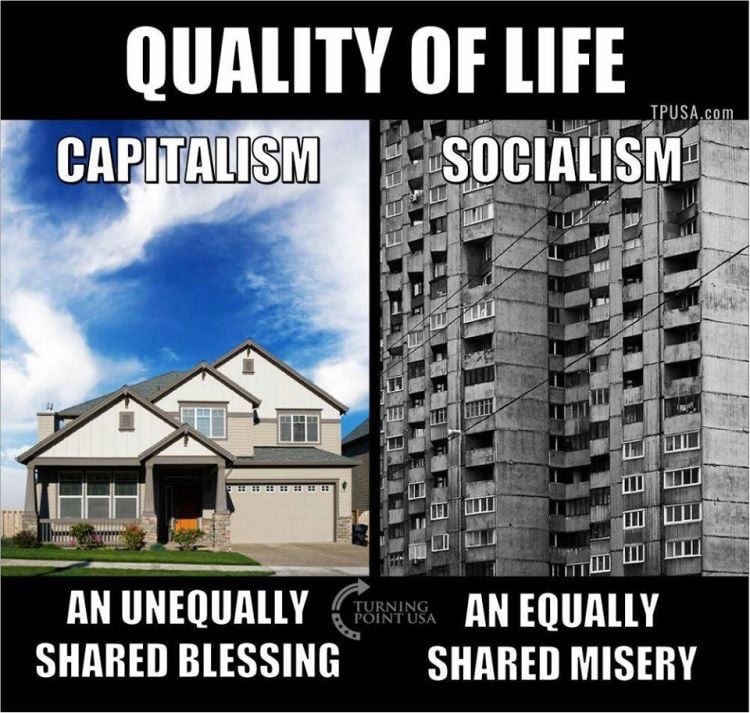 Creating something that people want is how one gets wealthy in a market economy. Sadly, there’s another way to get rich. It’s called cronyism, and it can make billions for the lucky businesses that get government support — whether their products are profitable or not. In the process, the taxpayers foot the bill.

Taxpayer insurance against unprofitability takes many forms, from loan guarantees to grants, which provide a no-lose scenario for beneficiaries. If the business is profitable, then the corporation makes massive profits. If the business goes bust, then the taxpayers take a hit. Either way, the crony capitalist wins.

Perhaps the most prominent case of cronyism in modern history is Elon Musk. A brilliant entrepreneur, Musk founded the online payment company X.com with profits he made off the sale of Zip2 — another profitable company and the first online version of the Yellow Pages. X.com eventually merged with Confinity and became the wildly successful PayPal.

And there were many other successful ventures that made Musk into one of the most successful businessmen in the world. According to Forbes, Musk is worth $14.3 billion. Much of his wealth is the result of producing brilliant ideas, creating value for others and revolutionizing the way we do business.

More recently, however, Musk has used his wealth to invest in space travel, solar panels and electric cars. There wasn’t anything wrong with that until Musk dragged the government into it. Tesla Motors, SolarCity and SpaceX — a few of his highest-profile projects — have relied heavily on government subsidies. According to a 2015 article in the Los Angeles Times, these three companies “together have benefited from an estimated $4.9 billion in government support.” And though none of these projects is profitable on its own, Musk is making a mint.

Tesla secured nearly $1.3 billion in benefits from a variety of sources, including money from Nevada to set up a car battery factory, federal subsidies through the U.S. Department of Energy’s Advanced Technology Vehicle Manufacturing program, and a number of federal and state tax breaks for the purchase of Tesla vehicles (such as the $7,500 federal tax credit and a $2,500 California rebate). Why would so much in government subsidies go to produce a car that only a few Americans can afford? The new Tesla Model S ranges from $80,000 to nearly $115,000 before tax credits and rebates.

SolarCity got over $300 million in federal grants and tax incentives, in addition to state and local subsidies meant to create an artificial demand for solar energy. In a funny twist, the company even moved in to old office space from Solyndra, the bankrupt crony solar panel company run by large donors to President Barack Obama’s campaigns and subsidized by the infamous Department of Energy’s 1705 loan program.

The Los Angeles Times shed some light on the state and federal cronyism involved in SpaceX: “On a smaller scale, SpaceX, Musk’s rocket company, cut a deal for about $20 million in economic development subsidies from Texas to construct a launch facility there. (Separate from incentives, SpaceX has won more than $5.5 billion in government contracts from NASA and the U.S. Air Force.)” And why are the taxpayers subsidizing a company that specializes in commercial space travel when the United States has a hard enough time balancing a budget?

The SpaceX website says: “SpaceX designs, manufactures and launches advanced rockets and spacecraft. The company was founded in 2002 to revolutionize space technology, with the ultimate goal of enabling people to live on other planets.” U.S. taxpayers shouldn’t be on the hook for space travel and other ideas of private purpose that won’t benefit many, if any, taxpayers.

Musk is a billionaire many times over. If he thinks colonizing other planets is a profitable idea, then he should put up his own money. The taxpayers shouldn’t be forced along as passengers on his expensive and risky experiments.

Elon Musk made his fortune by inventing products commonly used by consumers every day. Now he has resorted to taking billions in government cash and subsidies to work on ideas that probably won’t return a profit to the taxpayer. He’s using his friendships in government, as well as some high-priced lobbyists, to keep the spigot of government money going his way. Though it has been profitable for him, Musk is a case study in cronyism and a shining example of a rich individual abusing his influence to make taxpayers pay for risky investments.