Here is a new textbook that should be issued to all incoming special snowflake college students. Go ahead, take a look. Susan Rice, along with Hillary Clinton and Barack Obama, should be in jail. Her role in covering-up the dereliction of duty by our State Department during the Benghazi terrorist attacks is a shameful crime and she should be sharing a cell with Hillary. Still, for some reason, she is still allowed to walk free in society and the disgraced national security adviser told a group of college graduates that there are too many white people in government positions and that that needs to change.[3] 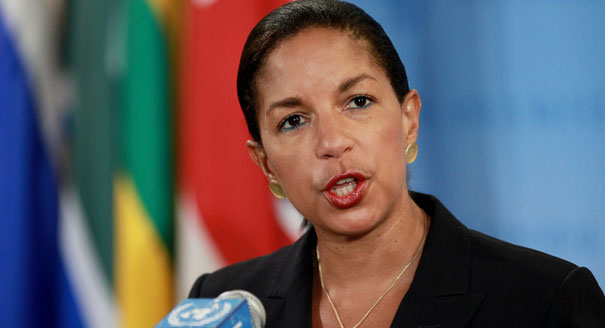 Rice famously told 5 media outlets[8] after the Benghazi terrorist attacks that the planned massacre was a protest over a YouTube video.

On Wednesday Susan Rice told college graduates there are too mnay whites in key government posts.

White House National Security Adviser Susan E. Rice said Wednesday there are too many white people in key government posts, creating the danger of “groupthink” that could put U.S. security at risk.

Referring to criticism that the U.S. national security workforce is “white, male, and Yale,” Ms. Rice told the graduates, “In the halls of power, in the faces of our national security leaders, America is still not fully reflected.”

This woman is a disgrace.

Imagine the outrage that would ensue if the inverse position was stated. Imagine if Rice had maintained that there were too many blacks or too many women in government and that that was a problem.

That sounds incredibly bigoted, no?

But hating on whitey is very chic right now, so Rice’s bigotry is actually hailed as “progressive” thought.