How On EARTH Is Obama Accepting The Slaughter Of Law Enforcement Officers? [Meme] [VIDEO] 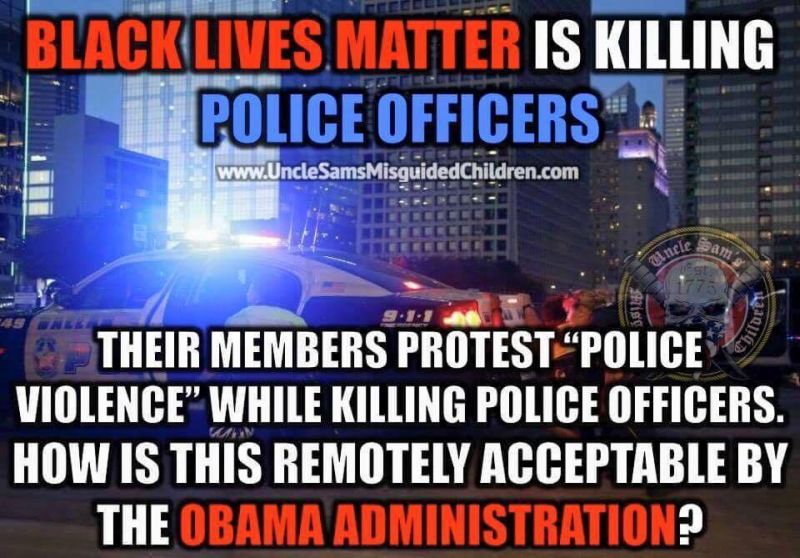 Things got tense in Baton Rouge, Louisiana last night.[3] Black Lives Matter protesters formed a human chain and assailed police headquarters there. They threw bottles at the police and assaulted them. There were several arrests. No one was injured as far as I know. The activists defied the police and got in their faces. They also aggressively attacked officers, which got a number of them arrested. This is just the beginning of the American Spring this summer… it will spread and there will be a lot more violence.

Police at the scene of a Baton Rouge protest detained an estimated 20 people early Saturday morning as a group of protesters on Airline Highway moved down the road.

At not long past midnight, protesters moved from the gas station where they had been located for much of the night at Airline and Goodwood Boulevard.

Protesters on Friday night had gone to Airline Highway, a visible street in Baton Rouge that is also the location of the Baton Rouge Police headquarters. But after most of the night in one location, they walked down Airline and eventually formed a human chain in the street.

At one point, two officers tried to grab a young woman, but other protesters wrestled her away. During that exchange, one officer drew a stun gun.

As protesters walked down Airline, police officers could be seen detaining protesters who stepped into the roadway.

Protesters stationed themselves in front of a Toyota dealership at one point, as officers equipped in riot gear faced off with them. East Baton Rouge Sheriff’s Office deputies lined up the roadway to block protesters from the street while other deputies marched shoulder to shoulder, pushing protesters up the grassy shoulder at the side of the road.

Law enforcement from several agencies were at the protest on Friday and Saturday, including BRPD officers, Louisiana State Police troopers and sheriff’s office deputies.

Demonstrations and vigils filled streets in no fewer than 18 cities last night, among them, Washington, D.C., Pittsburgh, Philadelphia, New York, Omaha, Detroit, New Orleans, Rochester, N.Y., Baton Rouge, Chicago, Atlanta, Denver, Los Angeles, San Francisco, Sacramento, Phoenix and Little Rock. In some places, police stood quietly in the background. In others, they wound up in riot gear as protesters faced them down toe to toe. Although many seemed sorrowful over the death of the officers in Dallas, many were not. Of those that were, I heard sideways justifications that they should not kill cops, because they would become just like them. That police families were now dying just like theirs. There is a lot of anger out there and violence is brewing quickly. After nightfall in Baton Rouge, at least 200 protesters remained outside of police headquarters. They gathered on street corners across wide roadways, facing officers — some in riot gear — who stood guard by the station and filled the grassy median. A line of protesters[5] grasped hands and held their arms in the air, staring silently at the officers across the street. Officers chased anyone who attempted to cross the street, detaining one man while protesters cried “Let him go!” And of course, the hate mongers and race baiters like the NAACP were in attendance egging on violence. This is not going to end well for anyone at this rate.

UPDATE: From Denise Simon at FoundersCode.com…[6]

The FBI issued an alert to Louisiana law enforcement agencies warning of violence against officers and planned riots in the aftermath of this week’s high-profile fatal shooting of a black man by Baton Rouge Police. Judicial Watch obtained a copy of the situational information report, which was distributed to police and sheriff departments in Bossier, Caddo Parish and east Baton Rouge as well as Louisiana State Police.

Titled “Violence Against Law Enforcement Officers and Riots Planned for 8-10 July 2016,” the alert warns that “multiple groups are calling for or planning riots and/or violence against law enforcement in Baton Rouge and Shreveport, Louisiana beginning Friday July 8 2016 and continuing through at least July 10, 2016. The document is labeled “FOUO” (For Official Use Only), a term the government uses to mark sensitive information that’s not classified. It was issued by the New Orleans division of the FBI. The agency did not respond to multiple calls from Judicial Watch for comment.

A spokesman for the Louisiana State Police Department, Lieutenant JB Slaton, referred Judicial Watch to the FBI and would not confirm or deny that his agency received it even though it appears on the list of recipients. “That’s an FBI bulletin, they would need to address it,” Slaton told Judicial Watch after being provided with a copy of the FBI alert. When asked if his agency got the FBI alert Slaton continued to be evasive, responding that “it’s an FBI bulletin.”

The alert is dated July 7 and includes disturbing images from social media, including one depicting a restrained uniformed police officer getting his throat slashed by a masked individual. Other social media images call for purging and killing all cops in Baton Rouge on July 9 and starting a riot by the courthouse in Shreveport that will tear shi_ _ down without killing our own black people.” Calling for unity in the violent protests, one social media post says “it don’t matter what color you are.” Another says “must kill every police!!!!”

After protestors blocked traffic, a pair of officers came in to detain a woman & it escalated. pic.twitter.com/13iqE9NuMy[12] 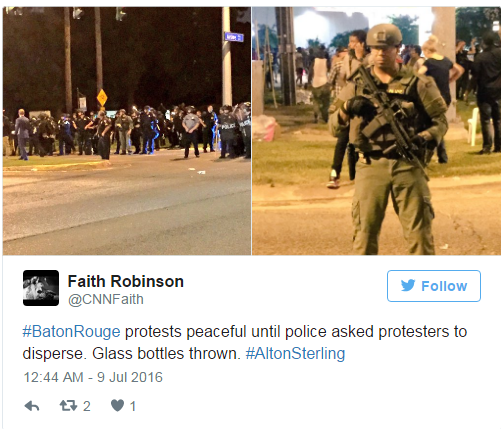 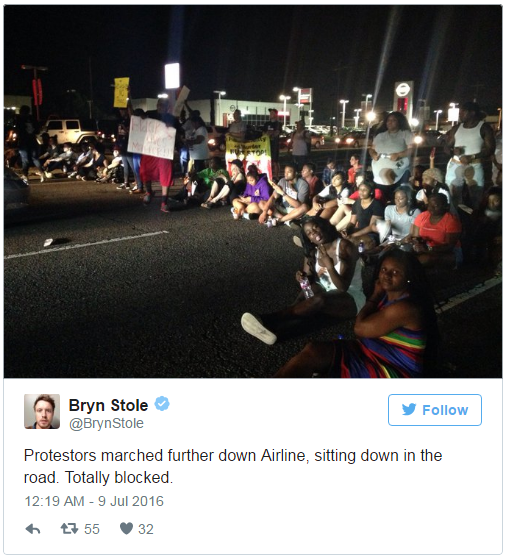