We all wonder why Democrats are what they are. Finally, someone posted a sign that REALLY explains it all. 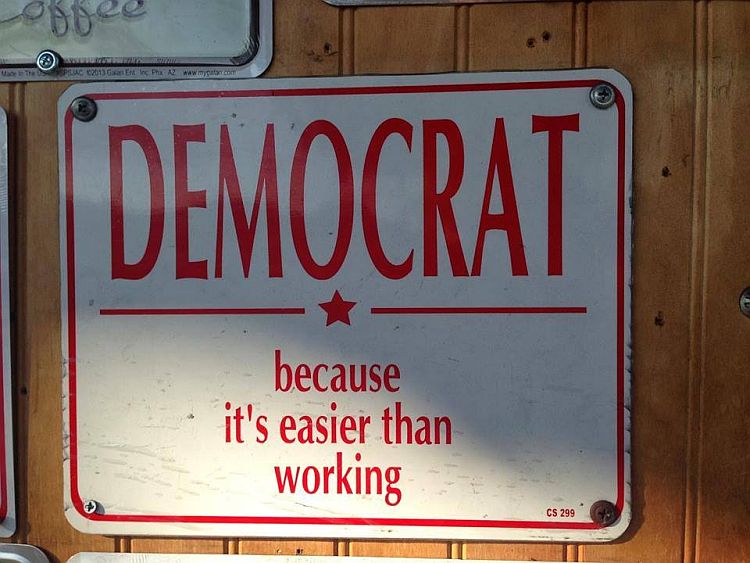 The federal government is taking in more money than ever. But it will never be enough. The CBO estimates that the national debt will reach $30 trillion in 10 years, despite ever higher revenues.

At some point the entire economy will collapse beneath the weight of debt. We are in this dire situation because of the welfare state.

Summing over all of these and related mandatory entitlement spending programs, in 1966 the redistributive welfare state absorbed 4.5 percent of the nation’s Gross Domestic Product; in 2016 this will be 13.3 percent of GDP, and 15 percent of GDP in 2026. Or a 317 percent increase over the fifty years between 1966 and 2016, and an additional 13 percent increase between 2016 and 2026.

Due to all of the deficit spending to finance this redistributive largess over what the government collects in tax revenues to fund it, interest on the Federal debt will increase from 1. 4 percent of GDP in 2016 to 3.0 percent of GDP in 2026, or more than a 100 percent increase in the interest cost on the national debt over the next ten years as a percentage of GDP.

Welfare state spending plus mandatory interest payments on the Federal debt now absorbs around 60 percent of everything Uncle Sam spends.

That percentage will only continue to rise until it can no longer be sustained.

Ideology matters. The infection of progressivism is bankrupting the wealthiest nation in the history of the world.

For more than a century, now, the older American political tradition of classical liberalism, with its belief in individual liberty, economic freedom and constitutionally limited government, has been slowly but surely eroded by the “progressive” ideal of political, social and economic collectivism.

Working harder to pay off the debt is futile. The more people are paid not to work, the fewer are left to pull a heavier cart. No matter how hard we labor, our standard of living will continue to decline.

The real dilemma is not whether this or that government program can be cut or reduced in terms of how fast it is growing at present and future taxpayers’ expense. The real challenge is to reverse the political and cultural trends toward more and growing fiscal redistributive socialism.

This will require a strong and articulate revival of a culture and a politics of individualism. It is, ultimately, a battle of ideas, not budgetary line items.

Our only hope is a turn in the tide of the ideological battle. This will happen when Americans once again understand that no one but you has a right to the money you earn.

It will never be enough.

On a tip from Bodhisattva and Torcer. Cross-posted at Moonbattery.