The Hypocrisy of Liberals and Wall Street Illustrated Perfectly [Meme] 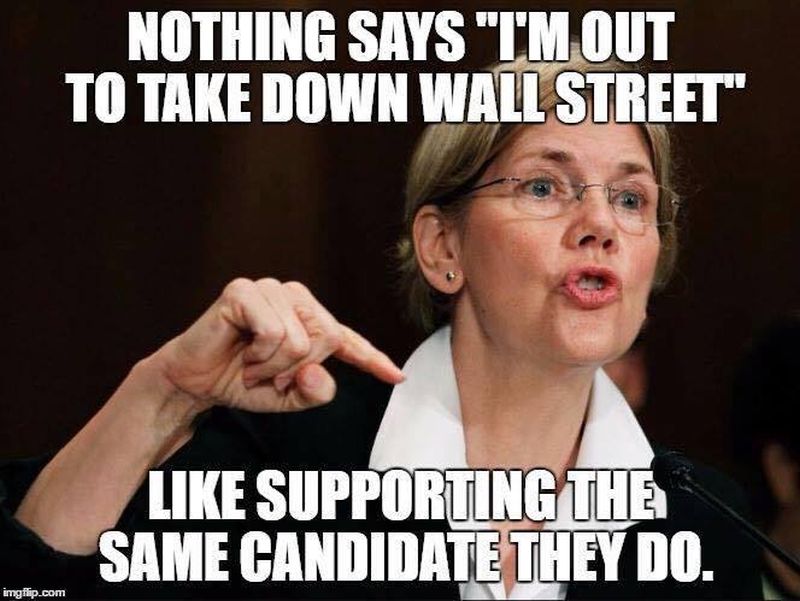 Remember the Occupy Wall Street movement? The 2011-2012 protests sought to bring Arab Spring-type “revolutions” to the United States through a combination of urban camping and complaining loudly about the state of the world.

The Occupy movement fizzled out because it failed to translate the whining into political action. Hey, Occupiers, it only took a few years, but your ride is finally here. You can’t miss it — it’s a Boeing 757 with “TRUMP” in gold letters. Here’s why Republican presidential candidate Donald Trump is the guy you’ve been waiting for.

— Trump is denouncing Wall Street from a position of strength. His idea of camping out on Wall Street is to emblazon his name across the front of the giant tower at 40 Wall Street, not to pitch a tent in Zuccotti Park. Trump really doesn’t have to be doing this. He could afford to lay low, enjoy his wealth and his grandkids, shrug off everything else, and play nice with all the establishment elites on the New York social circuit. Instead, he has chosen to use his leverage to champion average Americans and to call out the shenanigans of the so-called “one percenters.”

— Trump is a true capitalist who’s attacking the toxic collusion between corporate America and Washington lobbyists that is destroying the free market on which America was built and has thrived. He’s not some kind of anarchist or socialist attacking the establishment because he wants to replace it with something worse. Trump wants to restore it to what it once was. Preserving what works best is conservatism in the truest sense of the word.

— By minimizing ideological rhetoric, Trump has developed the sort of crossover appeal that the Occupiers didn’t have. Massachusetts Secretary of State William Galvin recently told the Boston Herald that more than 16,300 Democrats in the state have switched their affiliation to become independent voters since the beginning of the year. Galvin credits the “Trump phenomenon.” Many observers of Occupy Wall Street agreed that free-market and limited-government capitalism had been hijacked but were turned off by the leftist rhetoric that infused the movement. Trump is going after the establishment, too, but he’s limiting the kind of sweeping ideological proclamations that doomed the Occupy movement.

— Trump isn’t catering to the politically correct “social justice” crowd. For years now, honest and authentic debate has been hijacked by a sort of rhetorical McCarthyism. Contrary to the spirit of the First Amendment, there’s a pervasive sense that words have to be carefully policed, lest you commit the slightest misstep and have some special-interest activist group (the likes of which gravitated en masse to the Occupy movement) come after you. Trump’s billions allow him to speak freely.

— Trump is presenting actionable solutions to problems that Occupy Wall Street could only complain about. He’s denouncing the importation of cheap and illegal labor, and spotlighting bad trade deals that ultimately hurt American workers. He’s connecting the dots between the Occupy movement’s picket-sign slogans and relevant policy.

— Trump is sticking up for America’s workers. Last summer, in an interview with CBS’s “Face The Nation,” Trump called hedge fund managers “paper pushers” who are “getting away with murder” by being able to pay taxes at the capital gains rate (which tops out at 20 percent) instead of at the ordinary income rate like everyone else. He seems to know the difference between those who are creating jobs and those who are profiting by playing around with the fruits of other people’s labor. What exactly have hedge fund managers done to deserve breaks that the rest of us don’t get?

— Trump’s embrace of pragmatism facilitates creative solutions. He has said that he’d cooperate with Russia to defeat the Islamic State. During last week’s Republican debate in Houston, Trump expressed a desire to work toward peace between Israel and its neighbors in the Middle East, but “I think it serves no purpose to say that you have a good guy and a bad guy,” he said. “It doesn’t do any good to start demeaning the neighbors, because I would love to do something with regard to negotiating peace, finally, for Israel and for their neighbors. … As a negotiator, I cannot do that as well if I’m taking big, big sides.”

Trump is advocating for the re-democratization of Wall Street and Washington on behalf of average Americans who have long felt powerless, and he’s doing it in a suit and tie, backed by the sort of independent wealth that gives him immunity from those he’s criticizing.

(Rachel Marsden is a columnist, political strategist and former Fox News host based in Paris. She is the host of the syndicated talk show “UNREDACTED with Rachel Marsden” Tuesdays at 7 p.m. Eastern: http://www.unredactedshow.com[4]. Her website can be found at www.rachelmarsden.com[5].)

Has Technology Saved Us From A Dystopian Future, Or Created One?