Liberals VS The GREATEST Military In The World PERFECTLY Explained [Meme] 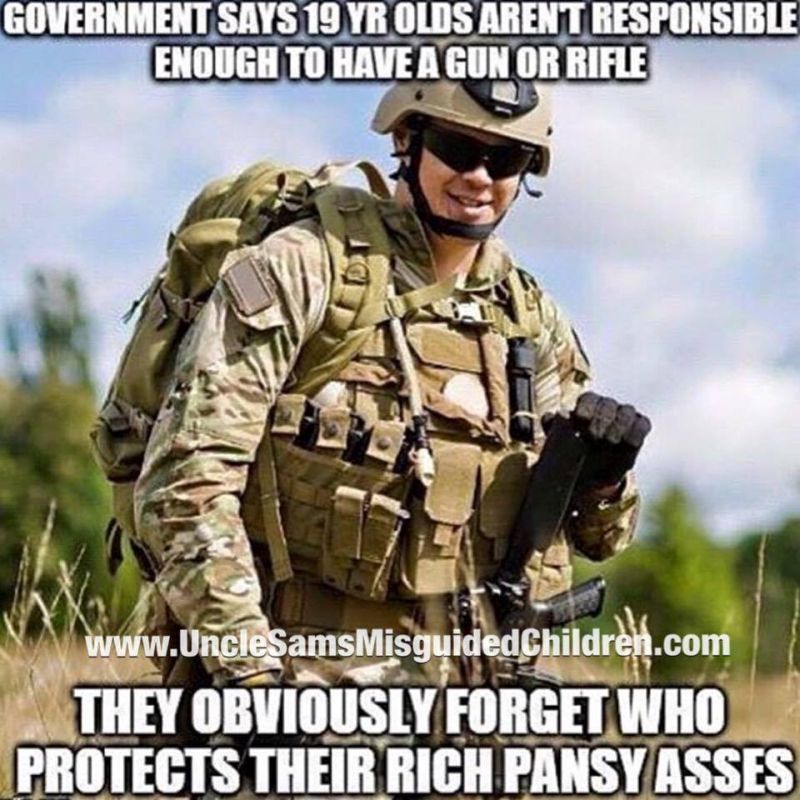 Leftists/Democrats have despised the US military ever since the Vietnam war, and have worked hard to diminish it, along with other hated entities, like the Christian religion and the US intelligence services. Fortunately, there were enough Republicans, along with a few Blue Dog Democrats, to stand in the way. So, instead of destroying the military from the outside, they’ve worked overtime to infiltrate the military and change it from the inside, much as they’ve done with so many other systems: Hollywood, education, the news media, etc.

We now have gays in the military, which will cause many to say “nope, no thanks” in joining and retention. They OK’d women for combat roles, but, they didn’t get the reduction of standards which was their intent. At least yet. They just approved the gender confused. And they’ve been pushing Hotcoldwetdry from the top. It’s all meant to utterly change the US military into a left wing dominated entity. The fact that this reduces defensive capabilities is actually a point

(Daily Caller[3]) Rhode Island Democratic Sen. Sheldon Whitehouse recently told people gathered in New York City that global warming “denial” hurts U.S. soldiers in the field and that the “main problem” with the military is its reluctance to join the climate crusade.

“The problem has been that the uniformed military has been reluctant to put its voice into – or its image into this fight,” Whitehouse said, according to a YouTube video posted Thursday[4].

Here’s the full quote, via Climate Depot[5], which also features the video

“The problem has been that the uniformed military has been reluctant to put its voice into– or its image into this fight. So, you’ve got the civilians, you’ve got the Quadrennial Defense Reviews, you’ve got the intelligence estimates, you’ve got the statements from our head of CINCPAC back when Admiral Locklear that this was the threat in the Pacific more than any other likely to disrupt things in a way that would disturb American interests. But, it’s hard to put a panel of people in uniform in front of the Environmental and Public Works Committee and say, you know, I’m a general, I’m an Admiral, I’m the head of the Marine Corps, we’re telling you–. What the Navy has done that’s been really interesting, Ray Maybus said he’s starting to actually evaluate his– you know, the military lives by evaluation– they’re starting to evaluate their base commanders on how well they communicate the risk of climate change about the base. So, if you’re the base commander of Norfolk, or of Naval Station Newport, or of– what is it, Cherry Creek Marine Air Station in North Carolina– you are suddenly have on your checklist of what you’re evaluated on how well you’ve communicated what the risk of climate change is. And, for those bases, for Navy bases particularly, it’s a really real risk. They’re on the sea. Sea level rise is going to swamp what they do. It’s really practical. So, when people hear it from as trusted a source as a uniformed military officer it will make a big difference, and they have not been very forward about it from the uniform side of the military. DOD has been good. Mabus has been the best.”

Instead of being evaluated on how ready the commanders have their subordinates to fight against actual enemies, they’ll have to waste time worrying about tiny changes in climate. And, yes, weather can have, and has had, a big effect on military campaigns. They should worry about weather. But, this will be about how evil mankind is putting out evil carbon pollution, a wholly political creation, and, much like Special Snowflakes worry about stupid stuff that has no bearing on the Real World, military commanders and their troops will have to do the same.

When this is being pushed by the elected officials and their political appointees, the commanders have to pay attention and take action, no matter how stupid.

Loathe him or love him, this is another reason to make sure Trump gets elected over Hillary, to put an end to the destruction of our military.

By the way, Sheldon, it’s Marine Corps Air Station Cherry Point. The least he could do when mentioning a military base is get the name right.