Conservatives have been speaking out against socialism – and this handy meme explains why we hate it so much. 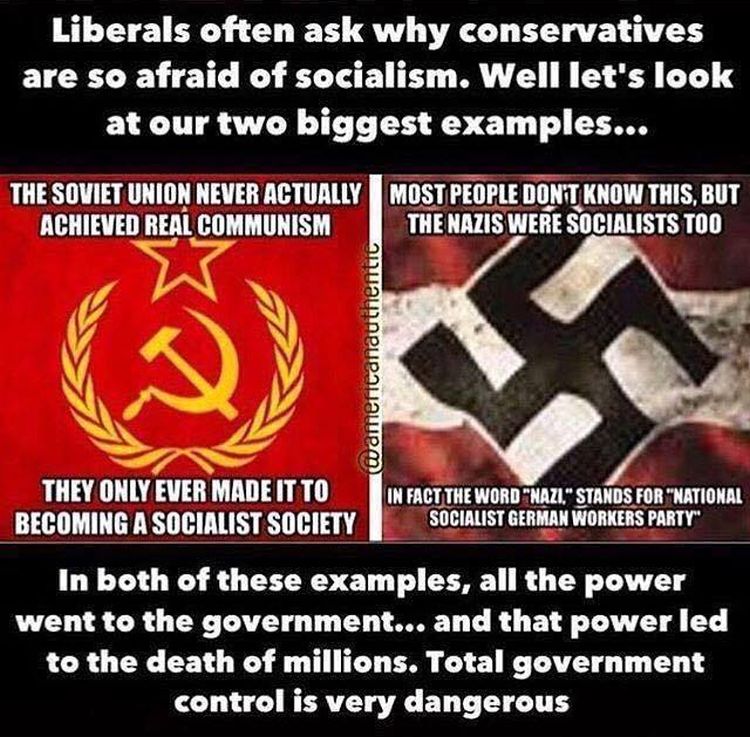 When we discuss Socialism*, we do need to highlight what it is now and then. According to the political science definition, Socialism is part of the Democratic Model, being on “the left”, with Liberalism, often referred to as Classical Liberalism now (this is what American Conservatism is mostly), in the middle and Conservatism on the right. European Conservatives are Classic Conservatives. There are three cores: economic, political, and moral. In the political core, Socialism features the most expansive amount of voting, where almost everyone can vote and they vote on almost everything. In the moral core, government stays mostly out of our private lives. The economic core is where Socialism is really made, where the government is heavily, heavily involved in the economy, dictating almost everything, even going as far as owning the means of production. It works about as well as you think, as Tim Worstall points out:

(Forbes[3]) It seems that the economic management of Venezuela has just been able to chalk up another milestone. We might have to give them a prize of some kind for this one: in a week or so the country is going to run out of beer. This isn’t because no one wants beer, not at all. There’s been no mass outbreak of Islam or Mormonism to turn the population away from the locally highly popular drink. It’s not because people don’t have the money to buy it: Polar, the local manufacturer, can sell all it is able to make. It’s not because Polar can’t make money doing so either: the company makes a good profit making and selling beer. Nope, it’s purely and only because Maduro and the other Chavistas are entirely incompetent at the management of an economy. And they’re incompetent in a very specific and very stupid way too. They simply do not understand the role of prices in markets.

Venezuela’s largest brewer says it has shut down beer production at the last of its four factories due to a shortage of imported supplies.

Cerveceria Polar says in an email that its factory in Carabobo state closed Friday. It had warned earlier that it had enough supplies only to continue production through the end of April.

They’re rather more than just the largest. Depending upon who you believe they brew (perhaps “used to brew” is better) 70 – 80% of the country’s entire supply of the sudsy goodness[5].

That’s right: the incompetence of socialism and it’s economic dictatorialism and idiocy has led to almost the end of beer in Venezuela. It takes materials like malted barley to make beer. There’s barely any grown in the nation. And the decades of idiotic socialist policies from the Venezuelan leaders, including the late Hugo Chavez, has led the money of the nation, the bolivar, to be virtually worthless, and the nation can barely afford to purchase toilet paper. Worstall then notes something from the Wall Street Journal[6] (quotes from WSJ in bold, Worstall regular)

After Empresas Polar SA closed its three other beer plants over the past several days, the shutting of the San Joaquin plant, near Valencia, will leave just a week’s supply of beer, the company said. Like many other firms here, Polar blames the government, which hasn’t allocated the dollars the company needs to pay for imported raw materials such as malted barley.

It’s that word “allocated” which is the problem. So, the company, just like all other importers of whatever, needs access to dollars in order to be able to pay for those imports. This means either being “allocated” some through the bureaucratic system or going out into the black market and just buying some. But it’s not actually legal to do that:

“Without approval and a supply of [foreign] currency to the suppliers, the company doesn’t have a way to operate,” Mr. Mendoza said. “The company cannot go out and buy currency anywhere because it’s against the law.”

This is what you get with Socialist ideology: no toilet paper, rolling brownouts and blackouts (despite having access to lots of oil), a food crisis[7], the economy is in meltdown[8], communications are tightly controlled by the government, it’s national suicide in slow motion[9] (hit Fausta’s Blog for all things South America) and people won’t even be able to drown their sorrows in beer.

*Is it really Socialism? Economically, yes, but, voting is tightly controlled, and the government is heavily involved in people’s lives. Those aspects are more authoritarian. It’s more what would be termed Progressivism.