Memorial Day is not just about a 3 day vacation from work – it means so much more. 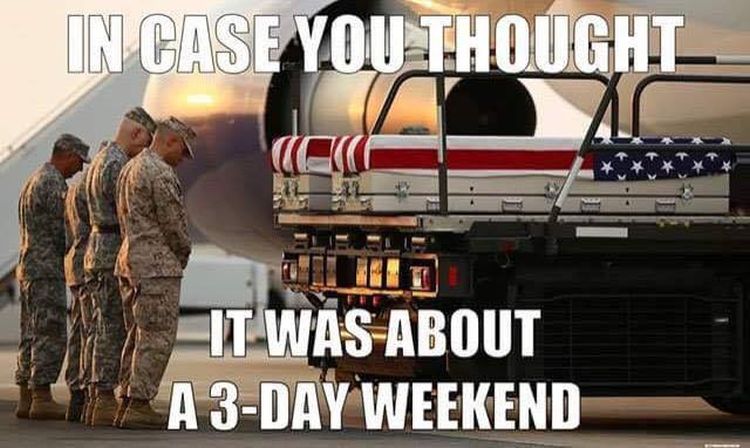 As Ace[3] points out, on one hand Team Obama decided not to increase security at the Benghazi consulate. On the other hand[4]

According to the Wall Street Journal[5], as the attack on the U.S. consulate was raging, Obama took a “wait and see” approach.

Ninety minutes after news of the attack reached Washington, Obama, Sec. of State Hillary Clinton, JCS Chair General Martin Dempsey, and a national security adviser convened for an oval office meeting in which they ultimately rejected the course of U.S. military intervention. Instead, they decided to reach out to the Libyan government to ask if they would send reinforcements.

When the U.S. personnel at the consulate left the main building for what was supposed to be a safe house, questions regarding the deployment of forces seemed moot.

But the battle was still raging, and Ambassador Stevens’ life was close to its end.

So, essentially, US leaders on the other side of the Atlantic ocean decided to not bother doing anything themselves other than make a pleading phone call to the brand spanking new leadership of Libya in the hopes that Something would get done, abdicating their roles as protectors of US citizens. Ambassador Stevens is unavailable for comment.

“There was no serious consideration at that hour of intervention with military force, officials said. Doing so without Libya’s permission could represent a violation of sovereignty and inflame the situation, they said. Instead, the State Department reached out to the Libyan government to get reinforcements to the scene.”

Yet, Obama sent two super secret special ops Blackhawks deep into Pakistan, 30 miles from the capital, loaded with SEALs, on a mission to kill Osama. That certainly was a violation of sovereignty, was it not? And isn’t deploying our military to bomb Libya from the air previously a violation of sovereignty? Could they not have called the Libyan government and said “hey, we’re sending military assets to protect our diplomatic personnel, deal with it”?

The U.S. ignores warnings of a parlous security situation in Benghazi. Nothing happens because nobody is really paying attention, especially in an election year, and because Libya is supposed to be a foreign-policy success. When something does happen, the administration’s concerns for the safety of Americans are subordinated to considerations of Libyan “sovereignty” and the need for “permission.” After the attack the administration blames a video, perhaps because it would be politically inconvenient to note that al Qaeda is far from defeated, and that we are no more popular under Mr. Obama than we were under George W. Bush. Denouncing the video also appeals to the administration’s reflexive habits of blaming America first. Once that story falls apart, it’s time to blame the intel munchkins and move on.

It’s not like we have multiple warships capable of deploying military assets that could have provided security for the consulate personnel in the Mediterranean or something.

BTW, lots of sensitive documents[6] were left behind, and the FBI still hasn’t accessed[7] the terrorist attack scene.