W. Calls Out Obama On His ‘Bathroom’ Issues In One Epic Meme

Is Obama REALLY planning on leaving a legacy about who is pooping where? Looks like it may very well be…. 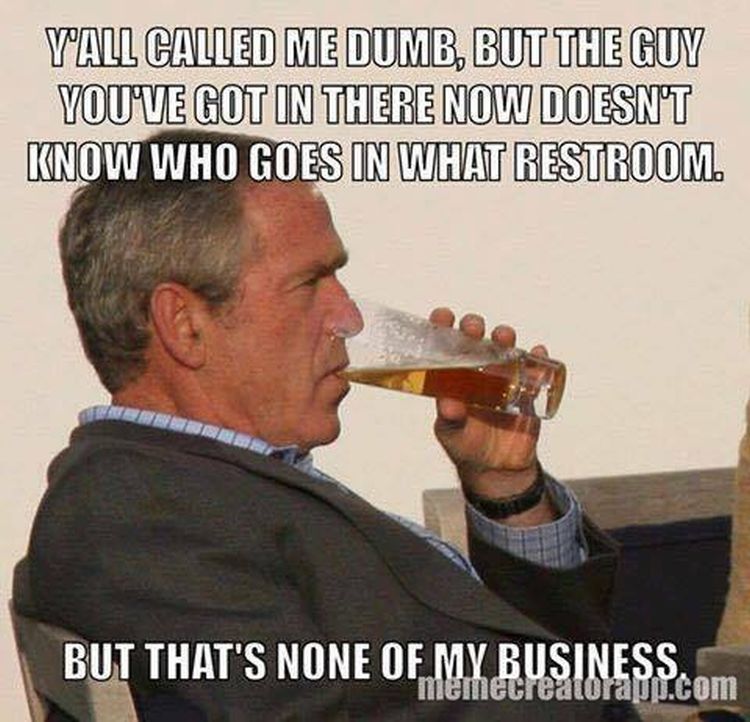 For some reason, parents and elected officials have a problem with penis being shown in bathrooms, locker rooms, and showers to their underage daughters

(NY Times[3]) The Obama administration on Wednesday faced the first major court challenge to its guidance about the civil rights of transgender students in public schools, as officials from 11 states filed a lawsuit testing both the scope of federal anti-discrimination law and the government’s sweeping interpretation of it.

The officials, in states from Arizona to Georgia to Texas to Wisconsin, brought the case in Federal District Court in Wichita Falls, Tex., and said that the Obama administration had “conspired to turn workplaces and educational settings across the country into laboratories for a massive social experiment, flouting the democratic process, and running roughshod over common-sense policies protecting children and basic privacy rights.”

Wednesday’s litigation fed into the nation’s intensifying, and suddenly fast-moving, debate about the rights of transgender people and, in particular, whether the administration has exceeded the scope of current laws defining discrimination in the United States.

(Washington Post[4]) “There is no room in our schools for discrimination of any kind, including discrimination against transgender students on the basis of their sex,” Attorney General Loretta E. Lynch said in a statement when the letter was released. “This guidance gives administrators, teachers, and parents the tools they need to protect transgender students from peer harassment and to identify and address unjust school policies.”

In that letter, the two agencies cited Title IX[5], which prohibits sexual discrimination at educational facilities that receive federal funding, and said that this extended to how schools treat transgender students. The lawsuit filed Wednesday argues that the Obama administration was “officially foisting its new version of federal law” on schools and accuses federal officials of seeking “to rewrite Title IX by executive fiat.”

Of course, in a sane world, telling a biological boy or girl to use the bathroom that conforms to their actual biological sex is not discrimination. Psychologists and those involved with behavioral studies will tell you that the mass number of young people who have these wacky feelings that they should be the opposite biological sex grow out of that as they grow into adulthood. The slightly saner option would be for those who are gender confused to accept compromises, like using single sex bathrooms and having separate showers and changing rooms. The TG community, along with their lawyers and such, refuse to allow this. They want penis being exposed to Other People’s underage daughters. And so does the Obama administration.

Which attempted to create law out of thin air.

“While the department will review the complaint, the federal government has strong legal foundations to uphold the civil rights of transgender Americans,” the Justice Department said in a statement Wednesday night.

Texas is joined in this latest lawsuit by Alabama, Georgia, Louisiana, Oklahoma, Tennessee, Utah, West Virginia and Wisconsin, as well as the Arizona Department of Education and Maine Gov. Paul LePage (R). In addition, the Harrold school district and another small district in Arizona were included.

North Carolina has its own suit against Los Federales over HB2.