What Women For Hillary Should Really Consider Before Voting [Meme] 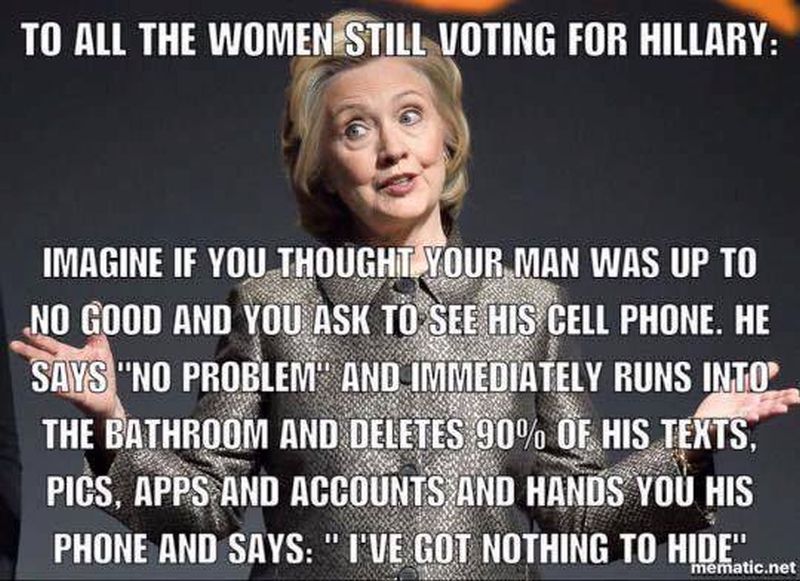 Even with all her baggage, the mainstream media continues to paint Hillary Clinton as an angel of light.

As nice as she looked at her acceptance speech, fake smiles and pretty white pantsuits can’t cover over ugly. The kind of ugly that flows from the inside out. Nice smiles can’t whitewash over grieving Benghazi family members who tell us she lied to them about why those heroes died. They died in a country she and President Barack Obama botched up so bad, the president had to authorize an uptick in U.S.-led attacks against ISIS recently.

We’re told that the woman in a white pantsuit cares. Sure. Hillary showed us how much she cares — about herself and personal convenience rather than our national security — when she broke State Department rules and set up a personal server in her home.

The FBI admitted that Hillary lied to the American people about her emails and then she turned around and lied about what the FBI said about her lies.

Makeovers can’t make over that.

And now WikiLeaks’ Julian Assange just announced another email dump is on the way that he claims will demonstrate that Clinton tried to arm “rebels,” jihadists, in Syria. We’ll wait to see, but two things are pretty certain: Hillary would deny it using infamous Clinton legalese. And the mainstream media would change the subject, introducing newfangled nonsense about why Hillary’s opponent (no matter who) is unfit for the presidency.

Even if a WikiLeaks dump revealed that the newly released ISIS “hit list” of U.S. soldiers’ information was hacked from information on Hillary’s server, we’ll be told, “There’s nothing to see here; time to move on.”

So much is at stake, reaching far beyond Supreme Court appointment.

Let me count the ways.

It’s pretty obvious that a Donald Trump administration or any Republican administration would make liberals accountable for things the media ignored. Like when the Obama administration was caught spying on U.S. journalists … or when the Department of Justice targeted political opponents … or that the Internal Revenue Service denied tax status to conservative groups … or the Veterans Administration delayed and denied care to veterans.

Surely Both Bill and Hillary Clinton alsofear what a Trump presidency might mean, givenHillary’s State Department email saga refuses to go away. Judicial Watch just released almost 300 pages of emails which call into question if there was a relationship between State Department and the Clinton Foundation during her tenure as secretary of state.

To be clear, the recent email scandal isn’t Hillary’s first. As reported by the New York Post in May, as first lady, Hillary was caught up in “Project X.” While investigating scandals to which Hillary was attached like Whitewater, Filegate and Travelgate, investigators discovered that more than a million subpoenaed emails went mysteriously missing.

Of course, Hillary seemed to blame everything on a “vast right-wing conspiracy” and the Teflon duo to which nothing seems to stick received nothing more than a hand slap.

The smoke’s been rising around Hillary for decades. Even still a nice promotion awaits someone so scandalous, the faithful see her presidency as part of “God’s judgment on America” if she wins.

©2016 Susan Stamper Brown Susan lives in Alaska and writes about culture, politics and current events. She was selected as one of America’s 50 Best Conservative writers for 2015. Her columns are syndicated by CagleCartoons.com. Contact her by Facebook[4] or at [email protected]

Abortion, the DNC and Christians