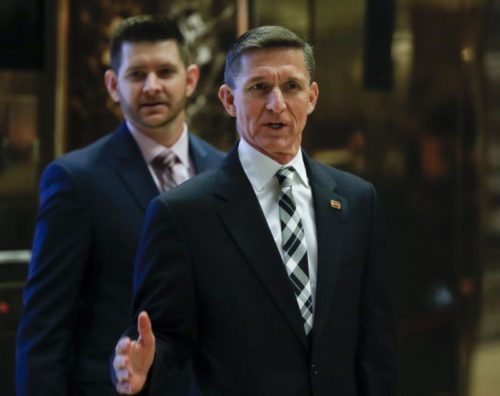 As the disingenuous, Democrat-staffed Mueller investigation rolls onward, looking for its next victim, word comes that the Special Prosecutor has obtained enough evidence to charge former Trump National Security adviser, Lieutenant General Michael T. Flynn and his son, Michael G. Flynn. The elder Flynn was fired by Trump after just 24 days for not being forthcoming about his ties with Russia when being questioned by Vice President Pence.

The two Flynns stand accused of possibly allegedly engaging in a scheme paid for by Recep Erdrogan, President Of Turkey, to return a US based elderly Turkish cleric, who is accused of orchestrating an unsuccessful coup against Erdrogan, back to Turkey, no doubt to face legal consequences. As well, the investigation questions whether Flynn was involved in money laundering or whether he lied about his overseas contacts.

Michael Flynn Jr. isn’t mincing words. In response to being mocked about the potential impending charges, he tweeted out that he won’t be going to jail and that he knows how disappointing that will be for the Left. See his tweet below.

The SJW are out in full this morning….the disappointment on your faces when I don’t go to jail will be worth all your harassment…

NBC was probably very happy to tweet about the possible charges against the Flynns. See their tweet below.

The Mueller investigation is literally infested with Hillary supporters. The idea that it is unbiased is laughable. That being said, it remains to be seen what charges may be brought against the father and son.

Robert Mueller has already conducted an intimidating predawn raid on the home of Paul Manafort, who was Trump’s campaign manager for a short time and indicted him and his business partner Rick Gates on 12 counts, which include conspiracy against the United States, conspiracy to launder money, unregistered agent of a foreign principal, false and misleading FARA statements, false statements and seven counts of failure to file reports of foreign bank and financial accounts. Both have pled not guilty. Whether the charges have any merit remains to be seen.

Mueller and his team will not stop until they are stopped. Their goal is to fabricate something against the President. Thus far, after many months and much taxpayer money, they still have nothing on Trump. Nothing. But their hope of getting to Trump via these other people remains.

In fact, Mueller should be fired. His connections to former FBI Director James Comey, along with the one sided hiring of his staff, is reason enough he needs to step down. The entire investigation is nothing more than a witch hunt, as Trump has said. As such, Mueller is the last best hope of the Trump-hating American Left to remove him from office. The Left still cannot accept the results of the election and will not stop attacking the President every chance they get. But Trump isn’t going anywhere. There is no Trump/Russian collusion. There is no Trump crime. There are only bitter Trump-hating Leftists hellbent on destroying him. Trump/Pence 2020.