Can You Spot WHY This Picture Has People Up In Arms? Look Closer… [VIDEO]

Shortly before leaving office, Barack Obama was asked what he planned to do with his time post-presidency. He said that he was going to take Michelle on a vacation and that’s exactly what they’ve done, jet-setting across the world and rubbing elbows with A-list celebrities. But it was one stop in particular that caused international outrage. 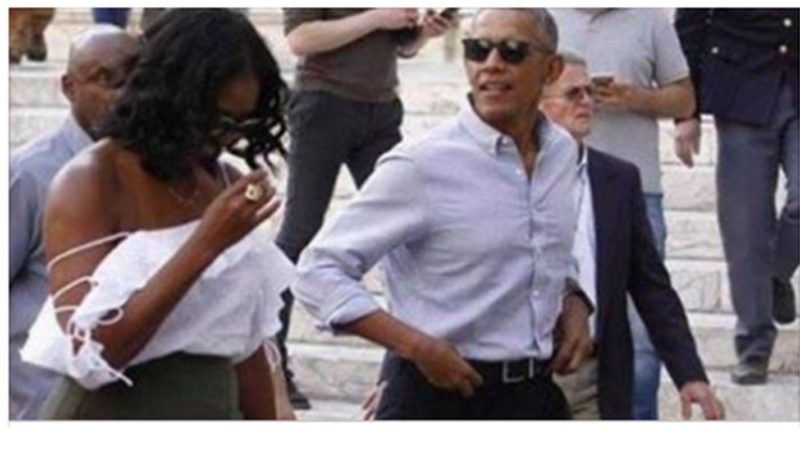 One of the Obamas’ stops was in Siena, in Tuscany, Italy earlier this year. The former First Lady is known for her sense of style and her fashion sense was on full display on this trip. But it wasn’t all positive.

On this particular visit, Michelle paired high-waisted cargo pants with a flirty off-the-shoulder white top. But the problem is that they were visiting the Duomo di Siena, a cathedral that dates back to the 12th century. And the cathedral, it turns out, has a dress code.

When the Obamas arrived in Italy, they had flown in on a private jet, escorted by six fighter jets and then were driven in a 13-car motorcade. Throngs of fans cheered them on and waited along the streets to catch a glimpse of the former President and First Lady. But Michelle’s outfit for the visit to the cathedral turned adoration into backlash.

The cathedral, like many other cathedrals in Italy, has a dress code and it’s fairly simple: no skirts or shorts allowed above the knee and no bare shoulders. Michelle’s strappy top very clearly violated that dress code and people called her out on it.

“You do NOT go into cathedrals in Italy with all that skin exposed, she should know better,” one person wrote on social media. “She should have some class and cover up…very embarrassing for Americans,” another commenter agreed. Even admirers of hers were aghast, with one person writing, “She was so classy in office. What happened?”

Not everyone, though, felt that her outfit was inappropriate. “She’s traveling the world on beaches and warm climates idiot, what do you think is going to happen,” one commenter snarked. “I can’t wait for my summer bronzing.” Another person, seemingly unaware of the cathedral’s dress code, wrote, “She is probly enjoying being able to wear whatever she wants and not have to follow dress codes for various events.”

Still others compared her to Melania Trump, both positively and negatively. “This would look better on Melania. Michelle has a great figure, but this top doesn’t suit her at all,” one person argued. Another disagreed, though, writing, “She had a great platform, educating people on eating healthy. What is Melanias again? Marry as rich as you can and avoid him at all cost? A real national treasure. Zero education, zero accomplishments, lies about her degrees, lies about her secret brother, lies about her plastic surgery, an utter disgrace to the nation. Michelle, you are missed.”

Do you think Michelle’s top was inappropriate?