Mike Pence is no longer mincing words.[1] I am sure he is quite aware of the figure he cuts standing on a wind-swept aircraft carrier’s deck. It’s meant to be patriotic and intimidating and it is. He has warned North Korean now in no uncertain terms that should they launch a nuclear or conventional weapons attack, they will be met with an “overwhelming and effective” military response. I certainly hope that is true. Previously, Pence has said that the era of appeasement for North Korea is over and we have run out of patience. In response, North Korea held a rally where they showed a video nuking an American city with ICBMs.

When Pence was chosen as Vice President, he struck me as a mild-mannered Christian conservative. Today, he also made it clear he is a military leader and does not fear standing toe to toe with the NoKos. He evidently has a titanium spine. Who knew? North Korea has now promised missile tests every week and surveillance shows they are still prepping for what looks like a nuclear test. The threats are now being taken very seriously as Hawaii prepares to defend themselves and our armada is floating off the Korean peninsula. One bad move by the Hermit Kingdom and they will find out just how tough America is. 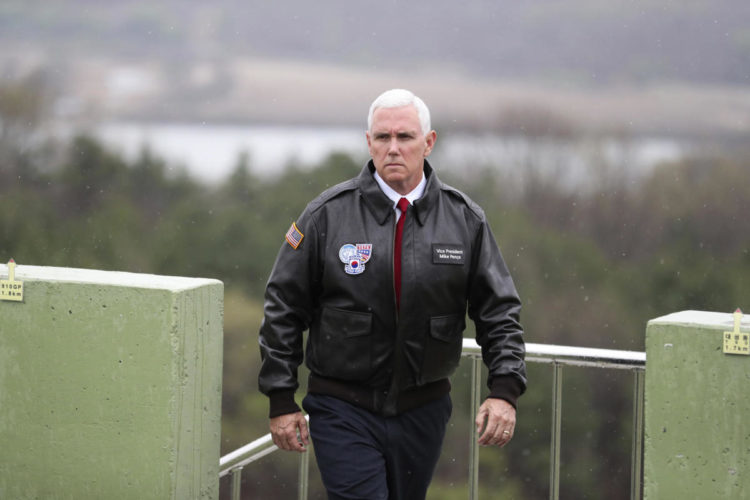 From the wind-swept deck of a massive aircraft carrier, Vice President Mike Pence on Wednesday warned North Korea not to test the resolve of the U.S. military, promising it would make an “overwhelming and effective” response to any use of conventional or nuclear weapons.

Pence, dressed in a green military jacket, said aboard the hulking USS Ronald Reagan that President Donald Trump’s administration would continue to “work diligently” with allies like Japan, China and other global powers to apply economic and diplomatic pressure on Pyongyang. But he told the sailors, “as all of you know, readiness is the key.

“The United States of America will always seek peace but under President Trump, the shield stands guard and the sword stands ready,” Pence told 2,500 sailors dressed in blue fatigues and Naval baseball caps on a sunny, windy morning aboard the carrier at the U.S. Yokosuka naval base in Tokyo Bay.

“Those who would challenge our resolve or readiness should know, we will defeat any attack and meet any use of conventional or nuclear weapons with an overwhelming and effective American response,” Pence said.

Pence bluntly told North Korea not to test the resolve of America. If I were the North Koreans, I’d take this man very seriously. Then Pence dropped the hammer and said four words that should strike fear in our enemy’s heart: “The sword stands ready.” It doesn’t get any clearer than that. They are a breath away from war. How fitting it is that he issued the statement from the deck of the USS Ronald Reagan.

Pence pointed out that readiness is the key and our military is more than willing and ready to dance with the NoKos. In the past, North Korea has used threats to extract aid and other concessions from the United States, but this time the tables are turned. This time we are the ones calling the shots and not backing down and unlike North Korea, we really do have the military might to back it up. The Chinese are on notice and the ball is in their court.