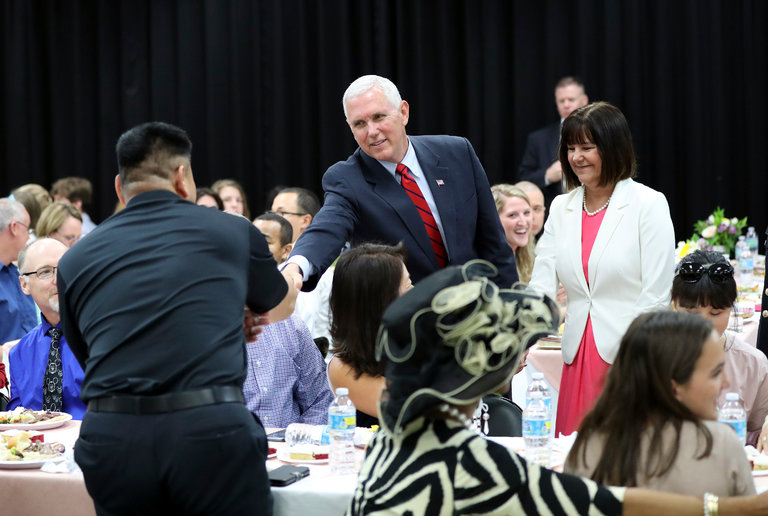 On Easter Sunday, Mike Pence set up to have dinner with the men and women of both American and South Korean troops and their families. And yes, his wife Karen Pence was indeed with him as well as his two daughters.

V.P. Pence started his 10-day tour of the Asia-Pacific region by taking off on Saturday with the South Korean capital of Seoul acting as his first stop. As reported by Breitbart[2]:

Pence and the second lady arrived in the afternoon at Seoul National Cemetery where the Vice President walked down a path lined with guards. He stopped at one point to acknowledge the troops, then continued on to a memorial tower. Accompanied by the superintendent of the cemetery, the head of the memorial division, Mrs. Pence and their two daughters, a guide walked them through steps of a ritual in English.

At Seoul National Cemetery, I laid a wreath to honor South Koreans who sacrificed their lives for the cause of freedom. #VPinASIA[3] pic.twitter.com/y825FCKZPC[4]

After laying a wreath, the Pences attended an Easter Sunday service at a church located on the Yongsan military base in Seoul.

It was a distinct honor to join US & South Korean service members for fellowship during Easter service in Seoul. Happy Easter! #VPinASIA[3] pic.twitter.com/0yca2Bk0qa[6]

Pence made some short remarks about his father, a Korean war veteran, before dinner was served.

“I stand before you today very moved this Eastern Sunday, because one of those soldiers more than sixty years ago was my dad. As we landed today on the peninsula I looked out at those rolling hills and I thought about second lieutenant Edward J Pence who was with the 45th infantry division of the United States Army that served here in combat.”

And of course, the President had a message he wanted to be sent to the crowd.

“I spoke to the president earlier today and I spoke to him on the way over, and he asked me to be here, and he told me in no uncertain terms to make sure I told all of you ‘we’re proud of you and we’re grateful for your service.”

After meeting with the leadership in Korea, Pence will be going on to Japan, Indonesia, Australia and finally Hawaii.