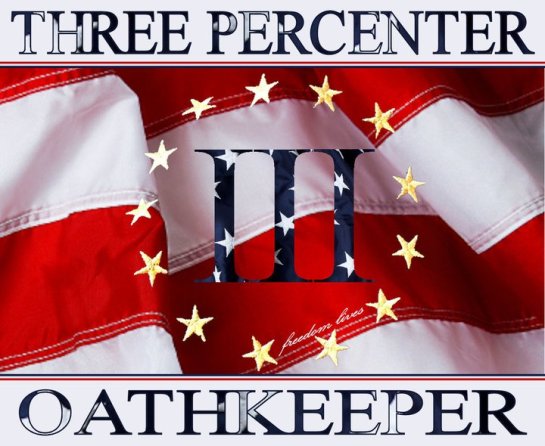 The border crisis is going from horrid to explosive. One shot could set the whole thing ablaze[2]. And it will only get worse as patriots converge on the border to protect our nation. Militia, Three Percenters and Oath Keepers are deploying to do the work that our government refuses to do – to protect and defend our sovereignty. Sadly, they may not only be fighting a foreign invasion crossing our borders with the blessings of our leaders, but our own government soon.

Mexico, Guatemala, El Savador and Honduras are involved with our government in machinations that can’t even really be called a conspiracy, since it is happening in front of our eyes and no one is stopping it. Millions are pouring across our open, unsecured borders and the majority are adults. These illegal aliens are being transported in secret and in the dead of night to every corner of America, with special emphasis on conservative, high-populace areas. It is an engineered voting demographic earthquake that is meant to forever level the voting field in the US in favor of Progressive/Marxists. What is occurring is an historical, mostly bloodless (so far) coup that was implemented to erase America’s borders and destroy the last true bastion of freedom on the planet. The mission is almost accomplished. 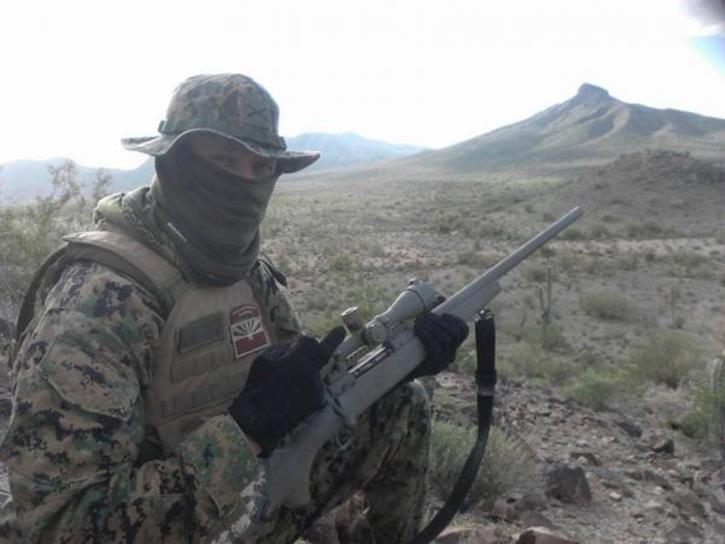 I agree with Mark Levin… a Congressional investigation needs to be forthcoming. It will at least document and bring to light some of the shadowy on-goings concerning this treasonous and criminal agenda employed from both sides of the aisle. Don’t be fooled by propaganda and smooth rhetoric from talking heads that are there to placate you – the government could shut down that border and fast any time they really wanted to. They could also build a fence along the whole border and implement security. Do you really believe a nation that went to the moon, that built the best and strongest dams in the world, that pioneered medicine… couldn’t figure out how to build a damn fence? It’s laughable.

Bob Owens points out[3] that an economic purse-string choke-hold could also be put to good use against Mexico:

The U.S. government could simply put economic sanctions on Mexico for failing to stop the invaders at their southern border, and the Mexicans would staunch the flow at two natural checkpoints, one in the state of Oaxaca on Mexico’s west coast, and the other in the state of Veracruz-Llave on the nation’s east coast. The vast wilderness area between these two states in the narrow “foot” of Mexico forces migrants to these coastal routes, where they can be captured and repatriated if the Mexican and United States governments had any interest in stopping the invasion, which the two federal governments quite obviously do not.

But no… no one in Congress is listening to the esteemed Jeff Sessions, who is decrying this Constitutional abhorrence. The only ones listening are the Tea Party, conservatives and American patriots melting the phone lines into the Capitol and they are being roundly ignored. 77% of Americans don’t want this illegal invasion – ignoring the outcry could bring on a civil war, which is exactly what Obama wants as he rubs is hands in gleeful anticipation of calling in UN troops to aid in civil unrest. 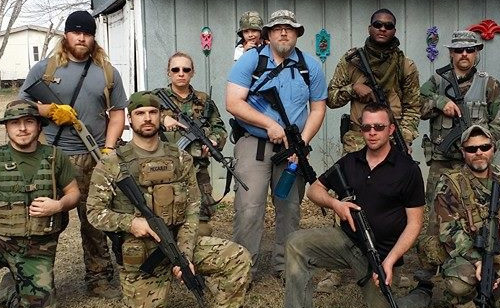 Enter the militias, Three Percenters and Oathkeepers. People I admire and the brave front line in what could very well be a second American Revolution. These individuals take to heart the true meaning of the Constitution and the intent of our Founding Fathers. They have seen and know what true tyranny is and are able and willing to fight it. They don’t talk it to death. They act and they cherish the Second Amendment – face it, if we lost the Second Amendment, we would have no other rights. It is that critical to our survival as a free people. It is the lynchpin in our fight and motivates our warriors to fight enemies, both foreign and domestic. They will stand against Obama’s desired fundamental transformation of America. We stood with three percent in the last revolution, we will stand now, regardless of denigration from pundits on both sides of the spectrum.

As Bob Owens entitled his excellent piece: The Next ‘Shot Heard ‘Round the World’ May Be Fired In Texas[4], the great state of Texas could be the ignition point on all of this. All of us have had more than enough of the dictatorial ignoring of our laws and Constitution by this President. But when we say ‘impeach,’ we are told by those we admire, it will be your fault we lose the next election… it will be your fault we lose on immigration. Bullcrap. Protests are on-going in hundreds of cities, millions are calling and writing and demanding this insanity stop. Then there are those who pick up their guns and go to the border to protect defenseless Americans and stem the flow of an invading force extraordinaire.

Photos showing dozens of members of the militia groups on the U.S.-Mexico border carrying semi-automatic rifles and wearing masks, camouflage and tactical gear provide one of the first glimpses into the group’s activities on the border.

Members of the militia groups, who say they have 10 active “teams” along the state’s southern border, are seen at campsites, walking along the Rio Grande River, pointing rifles and pistols out of frame and flipping off the camera in the photos obtained by the San Antonio Express-News.

A spokesperson for the group provided the photos under the condition that members’ faces be blurred because of fear of being identified by “cartel and gang members.”

One of the photos shows a Border Patrol agent leaning through an armed militia member’s vehicle window and pointing on a map. The U.S. Customs and Border Protection earlier this month strongly rebuked [6]the group’s presence on the border but did not return multiple requests for comment regarding the photo.

Gov. Rick Perry, who last week ordered[7] 1,000 Texas National Guard members to the border, declined to comment specifically on the militia groups through a spokesman but said he is “leading to secure the border.”

The groups, including Oathkeepers, Three Percenters and Patriots, began recruiting and organizing more than a month ago, as national media outlets began focusing on an influx of Central American immigrants [8]illegally crossing the border, including more than 50,000 unaccompanied minors.

Before you label these patriots as kooks, think again… they are ex-law enforcement, veterans and a variety of patriots who swore an oath to protect the US. Why do you think Obama labeled vets returning from the combat arenas in Iraq and Afghanistan as potential domestic terror threats? He fears these guys because they know the real score and are willing to face evil, no matter the cost. For the most part, these are not rednecks and wannabe weekend warriors — these are men and women who see what is going on and refuse to sit like apathetic sheep while we are destroyed from within. So far, the confrontations have been peaceful, with the militias handing over illegals to the Border Patrol. But that could change and fast. 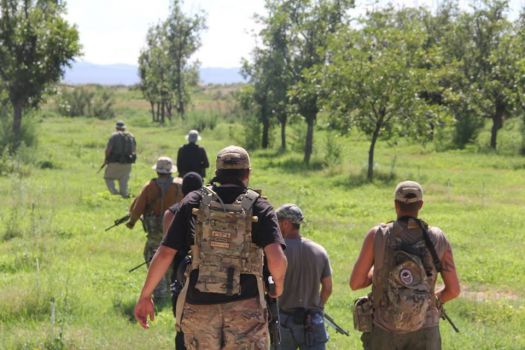 All it will take is an armed cartel or coyote to alter the scenario. The Mexican Army is also coming across the border and attacking our agents. These men and women won’t just stand there and be shot, they will retaliate and they should. America is at war — a war that is actively ignored by the media and government so that it can grow until it is out of control enough to have blue helmets brought in.

When blood is finally spilled, you will see Americans explode in anger at the government and their blatant instigation of this conflict and the lawlessness of a rogue President. When warriors fall and their blood cries out for justice, what do you think America will do? They will unite as they did after 9-11 and woe to those who want her destruction. Revenge will most likely be hot and rapid and unexpected. You can’t kill the American fighting spirit so easily – we aren’t made that way and we’ve got nothing better or more important to do than fight against a tyrannical suppression of our Constitutional freedoms. You may do a jig on our Founding Documents, but we embrace them and revere them. The government is about to get a red, white and blue wake-up call.

These patriots who go to the border may fall, they may be arrested… but more and more will go and they will be less and less forgiving. In the face of an out of control government who refuses to secure our borders and protect our country from invasion, we should expect nothing less.

A closing thought from Bob Owens[9]:

The federal government has abandoned their duty to defend the Republic. American citizens are now beginning to use their natural right to self-defense to form self-organized militias to protect their nation.

When government fails, the people will rise.

If we hope to remain a sovereign nation under a President who has abandoned the rule of law, we seem to have no other choice.

I, for one, stand with the patriots. I have chosen my side long ago. God bless the Three Percenters, the militias, the Oath Keepers, the Tea Party and the patriots out there. America’s domestic Enemy-in-Chief has lit the fuse of conflict and something is bound to occur either on the Southern border or abroad in the form of a major conflict that sets Americans off. Let’s dance.