Angry Muslim Confronts Cashier Over Flag Pin..70K Shares Over What Happened Next!

As a mom with a young man about to enter the honorable ranks of the United States Marine Corps, I can only hope that my son is honored the same way that this young man was when someone questioned an American cashier about her flag pin on her smock. Go, USA!![1] 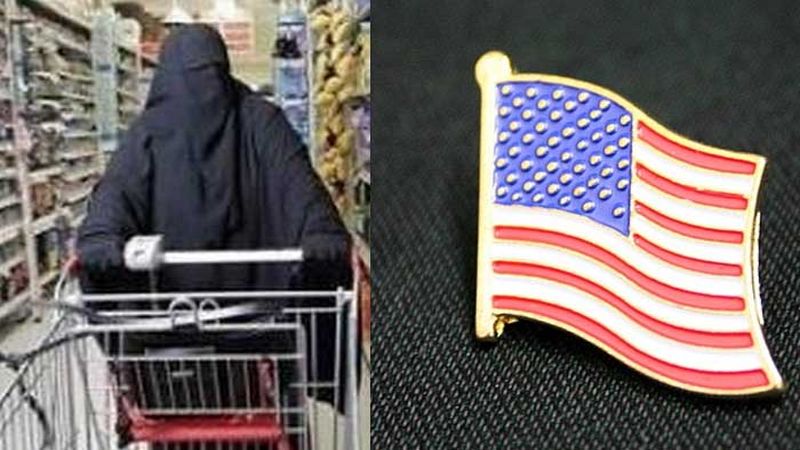 Hunter Green is an average American with a son in the military. Like all our servicemen, he usually gets a warm and appreciative welcome from Americans of all stripes grateful for his service and his sacrifice.

However, not every person is grateful for what the American military has done for them. One Muslim in a grocery store wasn’t, and Hunter Green’s son shared the story with his dad. His dad shared it on Facebook, and 77,000-plus shares later the story has gone insanely viral.

According to Green, his son “told me about an incident in the grocery store he stopped at yesterday on his way home from the base. He said that ahead of several people in front of him stood a woman dressed in a burkha (sic).

“He said when she got to the cashier she loudly remarked about the U.S. flag lapel pin the cashier wore on her smock. The cashier reached up and touched the pin, and said proudly, ‘Yes, I always wear it and probably always will.’”

The woman in the burqa was none to pleased with that answer. Green said she “asked the cashier when she was going to stop bombing her countrymen, explaining that she was Iraqi.”

Thankfully, someone with both patriotism and sense was in line, too.

“A gentleman standing behind my son stepped forward,” Green wrote. “Putting his arm around my son’s shoulders and nodding towards my son, he said in a calm and gentle voice to the Iraqi woman: ‘Lady, hundreds of thousands of men and women like this young man have fought and died so that YOU could stand here, in MY country and accuse a check-out cashier of bombing YOUR countrymen. It is my belief that had you been this outspoken in YOUR own country, we wouldn’t need to be there today.’”

However, the man offered her a solution.

“‘But, hey, if you have now learned how to speak out so loudly and clearly, I’ll gladly buy you a ticket and pay your way back to Iraq so you can straighten out the mess in YOUR country that you are obviously here in MY country to avoid.’

“Everyone within hearing distance cheered!”

We’re cheering over here for you. too! Thank you for your service, young man – without you this country would be in a sad state, indeed!