There are stories of remarkable heroism from our service members that show us what true courage and valor are. But you would be hard-pressed to find one that measured up to that of Alwyn Cashe’s incredible sacrifice. 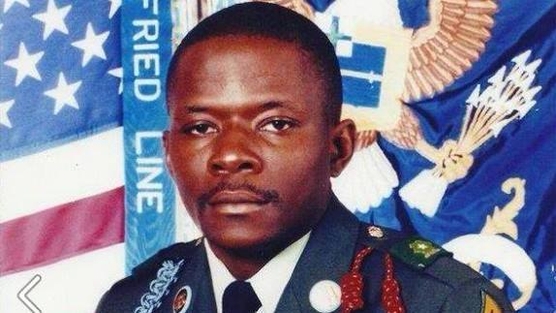 Sergeant Gary Mills was on fire.

He was trapped inside a burning vehicle, with hands burned so badly that he couldn’t open the door. Surely he and his fellow soldiers would die there.

But then the door opened, and a hand reached in and pulled Mills to safety. That hand belonged to Sgt. 1st Class Alwyn Cashe.

Now Brig. Gen. Gary Brito is fighting to see that Cashe is awarded the Medal of Honor.

In 2005, Cashe was there when a roadside bomb ruptured the Army vehicle’s fuel tank. Six soldiers were trapped inside as the vehicle burned, one of them Sgt. Mills. Cashe’s uniform was soaked in fuel, and there was enemy small arms fire to contend with. But Cashe went into the flames anyway, over and over again, even as his own uniform caught fire and he suffered second- and third-degree burns.

Eventually all six soldiers had been freed. Cashe then refused to be loaded onto the medevac helicopter until he knew that the other wounded men had been flown out.

Four of those six men later died of their wounds. Cashe’s wounds were treated at a Texas military hospital with his sister, Kasinal Cashe White, by his side. A nurse said to her, “You know your brother’s a hero, don’t you?”

Cashe’s first words when he woke up were: “How are my boys doing?” He then began weeping, lamenting that he didn’t get to them fast enough.

Cashe died on November 8, 2005. He left behind a wife and three children.

Cashe was originally awarded the Silver Star, the military’s third-highest award for valor, after Brito nominated him. Now, led by Gen. Brito, a movement is growing to see Cashe awarded the Medal of Honor. Harry Conner, a former drill sergeant who runs a Facebook page in support of Cashe, says, “This man allowed himself to burn to death to save his men. To not award him the Medal of Honor would be a terrible injustice.”

Gen. Brito has been working for seven years now to get Cashe posthumously awarded the Medal of Honor, something that he without a doubt earned. If there is anyone who deserves it, he does.