Army Sgt. Bowe Bergdahl Finally to Be Charged for Desertion and Here Are the Details [Video]

So, the scuttlebutt on the street[1] is that Bergdahl will be charged with the desertion charges he so richly earned and that he will probably be court martialed. Glory freaking hallelujah! But how pathetic it is that Lt. Col. Tony Shaffer has to go on the O’Reilly Factor and announce this as coming from his ‘sources.’ You see, Obama, the Commander-in-Chief, doesn’t want this publicized, so he is forbidding the Army from announcing the upcoming Military Tribunal that will hopefully vote to court martial Bergdahl. I say hopefully, because with the mob tactics that Obama employs, who knows whose arm he will twist on this – what threats will be used to free a victimized acolyte of the Religion of Peace. I pray that justice cometh for this asshat – he got a lot of good men killed trying to save his sorry ass. 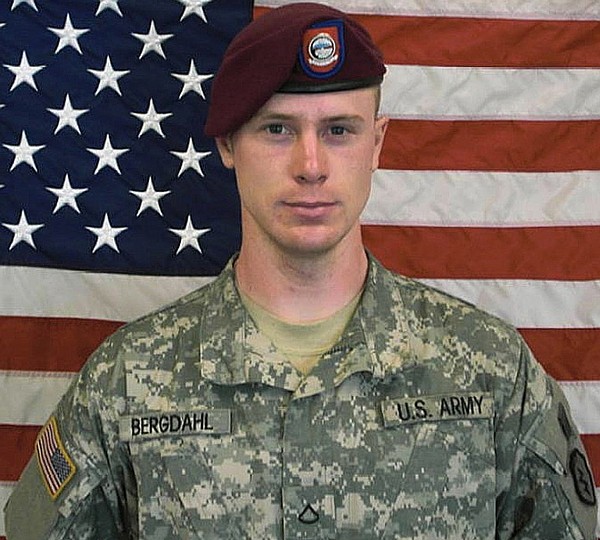 This undated image provided by the U.S. Army shows Sgt. Bowe Bergdahl. The Taliban proposed a deal
in which they would free the U.S. soldier held captive since 2009 in exchange for five of their most
senior operatives at Guantanamo Bay, while Afghan President Hamid Karzai eased his opposition Thursday
June 20, 2013 to joining planned peace talks. (AP)

Army Sgt. Bowe Bergdahl, who was reportedly held captive by Taliban militants for five years, will be charged with desertion for leaving his post, according to sources of retired Lt. Col. Tony Shaffer. Bergdahl was only released after President Barack Obama negotiated with the terrorists, agreeing to release five prisoners from Guantanamo Bay.

Shaffer, senior fellow at the London Center for Policy Research, told Bill O’Reilly on Monday night that his sources have confirmed the Army has concluded its investigation and Bergdahl’s lawyer has been given a “charge sheet” informing him of the desertion charge.

“This has been done, the decision has been made,” Shaffer asserted. “And let me be very clear, as a corporate entity, the Army has decided that they want to pursue Bergdahl for this violation.”

It’s important to note that Shaffer’s claims have yet to be confirmed by the U.S. Army or government officials.

He said the next step in the case will be similar to the grand jury process. If the charges stand, the Bergdahl case will proceed to a court-martial, according to Shaffer.

Shaffer also said the Obama administration has been keeping details on the desertion charges hidden from the public. He personally placed blame on Ben Rhodes, Obama’s deputy national security advisor.

“This is shaping up to be a Titanic struggle behind the scenes,” he added. “Believe me, the Army here wants to do the right thing. Factually, there’s no way they can not do the right thing regarding Bergdahl. And the White House, because of the political narrative, President Obama cozying up to the parents and because he, President Obama, releasing the five Taliban… The narrative is what the White House does not want to have come out.”

I can imagine the fighting and shenanigans going on behind the scenes here. ‘Titanic’ probably doesn’t do it justice. Good for Shaffer coming forward in this way – that was clever. Ben Rhodes is a minion of Obama’s, doing his dirty work as always. Obama released five stone cold killers for this scum bag… fawned over his parents and sang his praises to Allah. But the Army has other ideas and literally has to do their duty here. Let’s hope that duty sends Bergdahl to the brig for a long, long time. While you are at it, take away his Quran, so he can’t convert and turn other hapless souls to the dark side in his lengthy free time.