BREAKING: 46 Killed at Airport Base Attack

Obama pulled us out of Afghanistan[1] and now ISIS and the Taliban are running amok throughout the war-torn country. 46 people were just slaughtered by the Taliban at an Afghanistan airport that houses NATO facilities. Others were taken hostage. We weren’t there once again to stop it. It’s pretty much contained now, but there was a huge loss of life. Thousands of NATO troops and contractors are housed on the military base there, as well as Afghan military forces. They fought back against the Taliban, but of course we weren’t there to help our allies. I believe the Taliban still have six hostages that include two women and two children. It’s just a horrific situation and it should not be happening. It’s more blood on Obama’s hands. 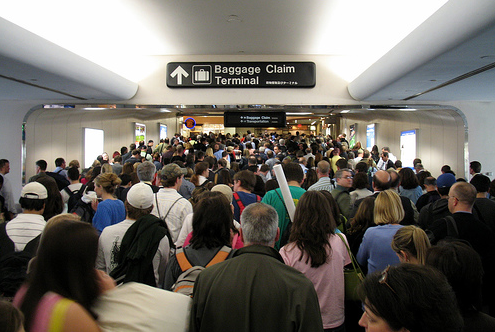 This is a serious incident, which just makes me shake my head in disgust. President Obama unilaterally declared that combat operations were over, ceased, done, ended in Afghanistan. The problem is he was telling himself that, as the enemy was not paying attention – as a matter of fact, they were training in preparation for their next combat assault. And so it continues down near the place where I spent 30 months — Kandahar Airbase in southern Afghanistan.

As reported[3] by Fox News, “At least 46 people were killed and several others taken hostage Wednesday in a Taliban siege on an Afghanistan airport that houses NATO facilities.

The site contains a civilian airport and a large military base that houses thousands of NATO troops, civilian contractors and Afghan military forces. The Taliban were met with heavy resistance at the base, but no U.S. personnel have been involved in the fighting, the official said.

“The operation is going very slowly as the Taliban have taken six people hostage including two women and two children, so we have to act cautiously,” Dawood Shah Wafadar, commander of the 205 Atal army corps in southern Afghanistan, told Reuters.

Wafadar added that nine Taliban members were killed out of a 14-member assault force. Afghanistan’s defense ministry said 37 civilians and members of the security forces also were killed in the attacks, the BBC reports.

A statement to Reuters from the Taliban said suicide bombers armed with light and heavy weapons entered the base and had attacked NATO and Afghan soldiers. Security officials told The Wall Street Journal that the attackers were dressed in military uniforms and managed to take over a number of buildings at the airport, firing rockets at the runway.”

I can attest that Kandahar Air Field is a massive complex and the fact that the enemy would endeavor to assault that base reflects no sense of defeat, but of being emboldened. There was never any consideration that the Taliban assault would take over the airfield. The intention was not to take it over but rather to send the message that it was not secure. The strategic objective of the fourteen-member Taliban assault force was to demonstrate that here, even in the winter months, the Taliban is still relevant and viable. They still retain the capability, capacity and will to conduct terrorist operations against government facilities and transportation infrastructure.

We must remember that Kandahar was the capital of Taliban-land, not Kabul, when the barbaric 7th century Islamist movement was in power. And just last month we know that a massive combined forces raid operation was conducted in Afghanistan against a Taliban sanctuary.

President Obama has reacted — just as with 50 special operators to Syria — and admitted that a residual force will remain in Afghanistan, not a complete withdrawal. But you have to ask yourself, what is the task and purpose of the force we have remaining in Afghanistan? What is the force composition?

We know there are U.S. Army AH-64 attack helicopters sitting in Iraq for “force protection” purpose, in other words, not engaged. So we have the daylight ISIS — or Daesh — victory parades through cities and not a single strike against these formations have been conducted. I remember the “highway of death” during Operation Desert Storm. That’s how you defeat an enemy when they hit the road and try to maneuver. You line them up and destroy them. Sadly it appears we have to drop leaflets to warn ISIS oil truck drivers before we hit them.

After all, we don’t want to hurt the enemy — because they may be civilians.

There is a problem in the world with non-state, non-uniformed unlawful enemy combatants, also known as Islamic jihadists. After all these years, they still populate the battlefield. Meanwhile, folks tell us we need to just let it be. Let me remind you what happens when Islamic terrorists gain ground and achieve a sanctuary. They launch attacks, not just regionally, but globally.

We must develop a strategy to strike the enemy — not nation-build — but crush them where they congregate. I don’t see that happening in this final year of the Obama administration. And it certainly won’t happen under Hillary Clinton, who once stated we must come to understand and empathize with our enemy. Yeah, right.

And one last thought, since we’re talking about Afghanistan…where is Bowe Bergdahl?

There were only 14 Taliban who attacked the airport and base. They have killed 9 of them, but in the process 37 military and civilians have died. Such is the resolve of the Taliban. They are emboldened with the withdrawal of the US and stormed this base dressed in military uniforms and took over several buildings and a runway. Allen West is right, it wasn’t about taking the runway over, it was to send a message that nowhere is secure or out of reach of the Taliban in their country. Obama is now leaving a small task force in Afghanistan, but it has no stated specific purpose. I don’t see how it will do much good or be very effective against a strengthening enemy there. This is not how you fight the enemy and Obama never intended to. Everything he does in the Middle East, whether it is against the Taliban, al Qaeda or ISIS, is fake and all for show. He empathizes with our enemies and the world is paying the price in blood and death.