Hillary Clinton has no shame.[1] She is a vile, evil human being. Not only did she lie to the families of those that were killed in Benghazi, she went on national television and called them liars if you can believe it. I certainly can. It was bad enough when Clinton and Obama were choosing between two videos to bolster their lies as those in Libya died. It is reprehensible to treat the loved ones of those who perished that day in Benghazi this way. It’s now coming to light that the military was ready long before the attack came and was still never brought in. She knew all along it had nothing to do with a fake video and that it was a planned attack. She doesn’t care and she hates the families of those that died for not just giving up and going away. 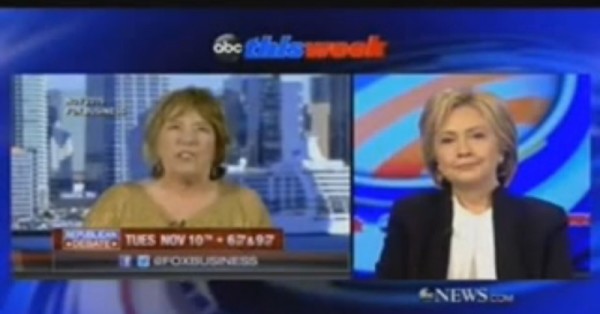 But it borders on wicked to go on national television and deny the whole thing, effectively calling the family members liars.

It’s kicking dirt in the faces of the families you lied to in the first place and makes the tragedy all the more disgusting.

As we know, Hillary was well aware that the Benghazi attacks were planned and orchestrated. She sent an assessment saying just that to a top Egyptian diplomat the day after the attack: 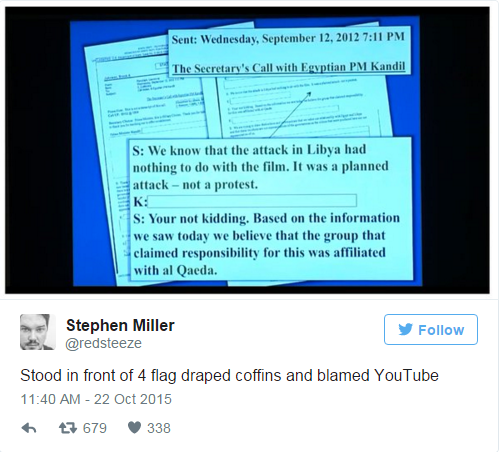 “We know that the attack in Libya had nothing to do with the film,” she wrote. “It was a planned attack – not a protest.”

So in the following days, as her top people went around the morning talk shows, lying about the cause of the attacks, she was planning her meeting with the victims’ families. Townhall reports[4]:

At the now-infamous Andrews Air Force base ceremony on September 14, 2012, Hillary Clinton told grieving family members that their loved ones had been murdered by a bloodthirsty mob incited by an online anti-Islam video. Four different relatives of three separate victims have publicly shared that recollection, including one who jotted down notes shortly after the meeting:

“I gave Hillary a hug and shook her hand. And she said ‘we are going to have the film maker arrested who was responsible for the death of your son,’” recalls Tyrone Woods’ father, reading directly from his written record from that day. Sean Smith’s mother and uncle remember the same thing, as does Glen Doherty’s sister. Now watch Hillary’s performance from this past Sunday. Note how anchor George Stephanopoulos, to his credit, asks a very specific question, preceded by clips of statements from several of the aforementioned family members:

STEPHANOPOULOS: Did you tell them it was about the film? And what’s your response?

CLINTON: No. You know, look I understand the continuing grief at the loss that parents experienced with the loss of these four brave Americans. And I did testify, as you know, for 11 hours. And I answered all of these questions. Now, I can’t — I can’t help it the people think there has to be something else there. I said very clearly there had been a terrorist group, uh, that had taken responsibility on Facebook, um, between the time that, uh, I – you know, when I talked to my daughter, that was the latest information; we were, uh, giving it credibility. And then we learned the next day it wasn’t true. In fact, they retracted it. This was a fast-moving series of events in the fog of war and I think most Americans understand that.

Hillary was asked a direct question: Did you tell the families that the attack was about the film? Her answer: No.
Where’s the followup? Is she calling the family members liars? Are they “partisan hacks”? Part of a “vast right-wing conspiracy?”

Like in poker, Hillary’s got a tell: If her mouth’s open, she’s lying.

She flat out lied about telling those families the attack was about the video. We heard them after the bodies came back and Clinton and Biden were grandstanding on their coffins. All Hillary knows is how to lie and maybe murder. Because as sure as I’m sitting here, that’s what she did in Benghazi. She knowingly and deliberately let those men die horrible deaths and then she went to their families and lied her fricking head off. Now she’s lying about lying to them. How could someone be this callous and dishonest? Hillary laughs as she lies. She does it in a calculated, yet casual way. This woman must never be president. She is just evil personified.