Amidst all the bad news we see today comes something that is truly moving. It brought tears to my eyes just watching their dance. Joey Johnson is a veteran who returned from Afghanistan. He met the love of his life at a concert. Four months later, a motorcycle accident paralyzed Joey from the chest down. But it didn’t end their love and they were married. Joey’s friends rigged a harness so he could dance with his beautiful bride[1]. 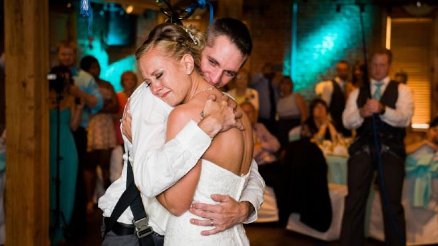 The wife of a paraplegic veteran knew her wedding would be special, but she wasn’t prepared for exactly what happened during the couple’s first dance.

As Michelle Johnson rested in the bridal suite per her relatives’ suggestion, her new husband Joey Johnson’s friends rigged a harness system that would allow him to stand and dance with her without his wheelchair, the New York Daily News reported.

When Michelle entered the ballroom and saw her husband, she broke into tears and embraced him. Wedding guests cheered as the couple swayed cheek to cheek to Christina Perri’s “A Thousand Years.”

“It was so amazing to be eye to eye with him again and such a dream come true,” Michelle Johnson told ABC News.

The couple met in 2012 at a country music concert, just four months before Joey Johnson, 27, was in a motorcycle accident that injured his spine and caused him to lose feeling from the chest down.

Joey had recently returned to the U.S. after 10 months of military service in Afghanistan.

“Our family and I have been through so much, but we all know that Joey is still the same person, funny and loving guy he was before,” she said. “He had to learn a different way of life with him and his chair: from showering, getting dressed and trying to function every day. But we are soul mates.”

The couple initially bonded over a shared birthday, June 29, as well as the same last name, Johnson. Joey Johnson married his bride June 28, 2013— a day before their shared birthday. He had proposed in April of that year.

The bride said she never expected her surprise wedding dance.

“If you know Joey, he cannot keep a secret,” Michelle said. “But he made my dreams come true and I never knew how special our day would really be.”

This is who we are… this is love, goodness and happiness even in the face of adversity. May they have a long and loving marriage with lots of laughter and children. And may one day, Joey dance again for real and on his own with his beautiful bride.