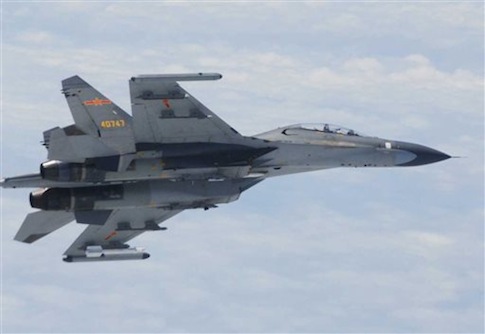 Amid the horrific beheading of journalist James Foley last week by ISIS, comes the news[3] that our old battle buddies, the Chinese, decided that it was must see news for the good citizens of Beijing. On a massive television screen displayed in downtown Beijing, an endless loop of bad news for America depicting her as weak and ineffectual was played over and over for all to see. It was propaganda for the masses, meant to emphasize the strength of America’s enemies and play up her fall as a super power in preparation for war. The news included the unrest in Ferguson, Missouri and the beheading of Foley. It is an old propaganda strategy that has been used by many, including the Nazis and the Japanese, only with a new technology twist.

The signs of a coming world war are all around us and becoming more brazen by the day. You see it in Russia who is now launching strikes[4] within the Ukraine and moving their troops[5] across the border. You see it with ISIS committing genocide in the Middle East and threatening American cities[6]. You see it in Israel, who is defending her very existence in the face of annihilation by murderous Jihadists. You see it in the rise of the Caliphate.

But the most blatant signs are with the Chinese and Russian militaries. And both of our communist nemeses are calling America a liar. Them’s fighting words, boys. Or at least, under any half-way decent president, they would have been. Under Obama, it’s cause for another round of golf.

International airspace is just that[7] – international. I’ve got news for the weak-kneed out there… all countries have always watched and spied on each other. Now, China feels superior enough to tell the US you can’t watch us from any distance[8]:

The ministry spokesman Yang Yujun said in a statement that one U.S. anti-submarine plane and one patrol aircraft flew to an airspace about 220 kilometers east of China’s Hainan Island to conduct close-in surveillance Tuesday morning, and then a Chinese fighter jet took off to make regular identification and verification.

Commenting on relevant criticism made by the U.S. side, Yang said that was “totally groundless,” as the Chinese pilot, with professional operation, kept the jet within a safe distance from the U.S. aircraft.

It was U.S. massive and frequent close-in surveillance of China that endanger the two sides’ air and marine security, and is the root of accidents, he said.

China urged the U.S. side to abide by international law and international practice, respect concerns of the coastal countries, and properly deal with the differences between the two sides on air and marine security issues, he said.

Yang said that the U.S. side should follow the principle of non-conflict, non-confrontation, mutual respect and win-win cooperation, take concrete actions, reduce and finally stop close-in surveillance of China, so as to create a sound atmosphere for bilateral military ties.

Not only that, their rendition of events with military aircraft last week differ vastly from American reports. On Friday, the Pentagon came out and called a Chinese jet’s encounter with a US anti-submarine warfare aircraft an “aggressive” and “dangerous” act. A formal protest was aired on the action with Beijing. The Chinese then proceeded to tell us to back off, mind our own business and call us lying liars. All show, because the Chinese don’t want America to see any more of their radical military buildup for war.

“We have registered our strong concerns to the Chinese about the unsafe and unprofessional intercept, which posed a risk to the safety and the well-being of the air crew and was inconsistent with customary international law,” Kirby said, adding that the incident was “very, very close, very dangerous.”

“Also–and we’ve made this clear–that it undermines efforts to continue developing military-to-military relations with the Chinese military.”

“The intercept was aggressive and demonstrated a lack of due regard for the safety and well-being of the U.S. and Chinese aircrews and aircraft,” Pool said in a statement, noting it was one of the most dangerous aerial encounters with the Chinese since the April 2001 EP-3 mid-air collision with a Chinese J-8.

Pool called the encounter with the armed Chinese fighter “a dangerous intercept of a U.S. Navy P-8 Poseidon that was on a routine mission.”

“On three different occasions, the Chinese J-11 crossed directly under the U.S. aircraft with one pass having only 50 to 100 feet separation between the two aircraft,” the spokesman said.

“The Chinese jet also passed the nose of the P-8 at 90 degrees with its belly toward the P-8 to show its weapons loadout,” he added.

“In doing so, the pilot was unable to see the P-8, further increasing the potential for a collision,” Pool said. “The Chinese pilot then flew directly under and alongside the P-8 bringing their wingtips within 20 feet and then before he stabilized his fighter he conducted a roll over the P-8 passing within 45 feet.”

This was a clear brandishing of military might and a threat. Showing their payload, while buzzing the American military aircraft is a direct provocation. This playing chicken started in 2013 and this blog and many others have written on it, warning of the implications of these pre-war games. The jet came from the same PLA air force unit in Hainan that was responsible for similar buzzes in March, April and May of this year. But instead of using military escorts and a warning of shooting down aggressors in international airspace, the Obama Administration would rather keep talking it to death. The Chinese don’t care about Obama’s lame threats and overtures… they care about world power and domination. Obama will keep blathering until America is blown to hell and back. Even then you’ll find him putting on a green somewhere, I’d wager. The only ‘closer’ military relations we are going to have with the Chinese and Russians are in combat. And at this rate, it will be sooner rather than later.

The Russians nudged us earlier this year. In April, a Russian Su-27 flew within 100 feet of a US Air Force RC-135 aircraft during another dangerous intercept over waters north of Japan. A weakened response to that poke brought on the machismo of the Chinese who are letting America know they feel they can now bully us and kick our ass.

This is all occurring during unprecedented Chinese military exercises held recently and currently underway in the Yellow Sea, East China Sea and South China Sea. They are practicing for war and America better get her act together. We may not have till 2016 before we are struck. If it were me, I would strike while America is in the limp-wristed death grip of a suicidal Marxist. Just sayin’.

China also is holding international military exercises in Inner Mongolia with Russia and several Central Asia states that are part of the Beijing-led anti-U.S. alliance known as the Shanghai Cooperation Organization.

The P-8 that was intercepted by the Su-27 is part of the Navy’s first squadron of new sub hunters deployed to Asia. Six P-8s, that can fire both missiles and torpedoes, are under the command Navy’s Seventh Fleet and are based at Okinawa’s Kadena Air Base. They support the fleet’s maritime surveillance operations as part of the U.S. pivot to Asia.

The P-8s were deployed in December–a month after China declared an air defense identification zone over the East China that encroaches on both Japanese and South Korean maritime zones. The U.S. government said it does not recognize the Chinese defense zone. China has threatened to use force to maintain its control over the area covering most of the East China Sea.

The Navy has described the P-8 as “the most advanced long range anti-submarine and anti-surface warfare aircraft in the world.” The jet also conducts maritime intelligence, surveillance, and reconnaissance (ISR) missions.

While we are decimating our military, laying off our experienced officers and handing out our “surplus” military equipment to local law enforcement like it was candy… our enemies are beefing up their ranks, equipment and technology. It doesn’t take a genius to see what will happen and soon if this isn’t reversed.

The Russians did a similar maneuver on April 23rd. In the RC-135 episode, the US electronic surveillance aircraft was flying near the Russian Far East coast northern of Japan. A Russian SU-27 intercepted the aircraft and rolled sideways to reveal its air-to-air missiles – then flew within 100 feet of the RC-135 cockpit. It was all caught on video, but the Pentagon refuses to release it.

These episodes come dangerously close to acts of war. And next time folks, it will be nuclear war[11]. China recently conducted the second flight test of a new, ultra-high-speed missile that is part of what analysts say is Beijing’s global system of attack weapons capable of striking the United States with nuclear warheads. While the US is reducing their arsenals, China is doing the radioactive two-step boogie. They are building up their nuclear warhead arsenal and America’s name is on those payloads (at least, figuratively). And what are we doing to counter this? Why… sitting on our red-white-and-blue asses of course. Nothing – nada. Our options for response are viewed as ‘stark.’

The United States and China have very different viewpoints[12] about the legality of US military overflights in much of the region as a result of China’s broad territorial claims and differing interpretations of rights conveyed under the Law of the Sea treaty. You just knew that treaty would bite us in the derriere, didn’t you?

Just how long do we let these communist asshats practice provocative prerogatives to bully the US? Does it take a nuke over a major city? Would that even make a difference anymore? China conducts a provocative aerial buzz on American military aircraft as does Russia and Obama jets off to Martha’s Vineyard and another round of golf. No worries boys… watch for the lights in the sky. Ooohhh… shiny!

Update: Show me yours and I’ll show you mine…