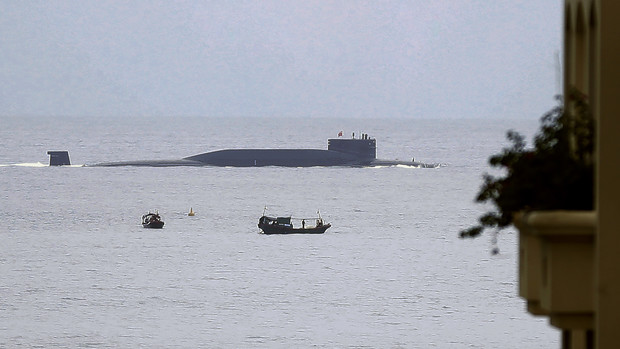 In this Aug. 28, 2014 photo, fishermen look at a Chinese nuclear submarine sails past…

The Chinese are moving[2] to make a first nuclear strike against them from anywhere on the planet impossible. The nearly invisible JIN class submarines armed with nuclear JL–2 ballistic missiles will be primed to take enemies down before they can launch an attack against China.

The nuclear-powered subs will probably conduct initial patrols with the missiles by the end of this year, “giving China its first credible sea-based nuclear deterrent,” according to an annual report[4] to Congress submitted in November by the U.S.-China Economic and Security Review Commission.

Deploying the vessels will burnish China’s prestige as Xi seeks to end what he calls the “cold war” mentality that resulted in U.S. dominance of Asia-Pacific security. Since coming to power, Xi has increased military spending with a focus on longer-range capacity, including plans to add to the country’s tally of a single aircraft carrier[5].

“For the first time in history, China’s nuclear arsenal will be invulnerable to a first strike,” said independent strategist Nicolas Giacometti, who has written analysis for The Diplomat and the Center for Strategic and International Studies. “It’s the last leap toward China’s assured nuclear-retaliation capability.”

China’s nuclear-defense strategy is engineered to provide retaliation capability in the event of attack from nuclear powered nations as far away as the U.S. and also from Russia and India[6], according to Felix Chang[7], a senior fellow at the Foreign Policy Research Institute in Philadelphia.

I doubt China has anything to worry about from Russia, since they are both part of the new Axis of Evil. However, I am sure they consider India a potential threat and the US a definite threat. This is also to bolster the threat against Japan to stay in line and cede territory to the Chinese or else. It will almost assuredly guarantee their control of the East and South China Seas.

The US military command seems to be very naive regarding China and their military structure. They are not weak or confused and President Xi Jinping has an iron-fisted control over his troops and country. A strong communist, Xi is not only a strategist, he’s a tactician militarily speaking. To underestimate him as a ruler is a deadly mistake on our part. As far as China is concerned, it is none of the barbaric American’s business concerning their nuclear or military arsenals. The Chinese will educate us on them when we are confronted with an attack. From what I can tell, the Chinese have us beat in space, in cyberspace, in the skies, under the ocean, in nuclear weapons and in the general military arena currently thanks to Obama and his gutting of our military and nuclear forces. We’re begging for an attack.

“High-confidence assessments of the numbers of Chinese nuclear capable ballistic missiles and nuclear warheads are not possible due to China’s lack of transparency about its nuclear program,” the U.S. report to Congress said. The Pentagon hasn’t provided an estimate of the size of China’s nuclear warhead stockpile since 2006, according to the report.

China’s defense ministry did not reply to faxed questions about when regular patrols by nuclear-armed JIN-class submarines would begin, or China’s nuclear strategy.

The modernization of China’s nuclear forces is focused on improving the capacity to deter other nuclear powers, said Giacometti, speaking by phone from Brussels.

Until 2006, its only ballistic missile able to deliver a nuclear warhead to the continental U.S. was the liquid-fueled, silo-based DF-5A, he said. These were considered vulnerable because fueling takes a few hours during which the missile must remain in its silo. To protect them, China built mock silos and adopted a policy of secrecy that made a disarming first strike harder to execute.

In 2006, China introduced the land-based mobile DF-31A ballistic missiles, whose 6,959-mile (11,200 kilometer) maximum range could reach the U.S. The missiles are solid-fueled, so can be fired almost immediately if warheads are pre-fitted, Giacometti said.

Whereas land-based launchers could be detected and intercepted, nuclear-powered ballistic-missile submarines that rarely need to surface are much better at hiding from US assets. China currently has three Jin class submarines and will have two more by 2020. Each could carry 12 JL-2 missiles, which after a decade of development “appear to have reached initial operational capability.”

We had better step up the modernization of our nuclear arsenals and nuclear subs before the Chinese get any funny Red Dawn ideas. The supposed experts out there really believe the Chinese will honor their “no-first-use” nuclear policy that states its weapons will only be used if China comes under nuclear attack. Idiots. When China feels they have enough of an upper hand and Russia and Iran come into play and are ready, well… the dance will begin and what fireworks there will be! Let’s hope it’s not before Obama leaves office.