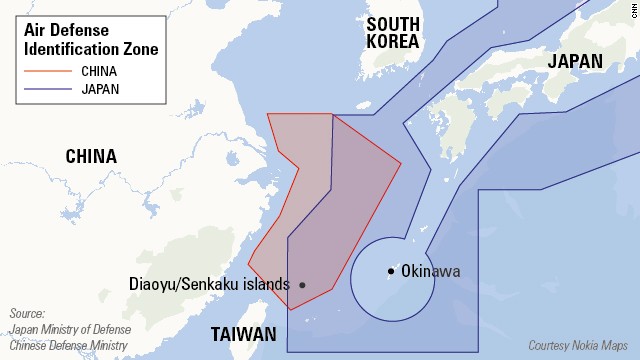 With no major world power posing any kind of a threat to them, China is donning their war paint and swaggering towards conflict. On the eve of Joe Biden visiting Japan, China ratcheted up the rhetoric of war and militarily threatened Japan over China’s newly declared air defense zone. They boldly state they will ‘enforce’ new aircraft controls in a maneuver that amounts to a dare to Japan to step over this midair red line. Poke, poke, threaten, dare – repeat until something happens[3]:

Geng listed a series of actions by Japan he said had increased tensions, including Tokyo’s frequent dispatch of ships and aircraft to areas near the disputed Senkaku islands, threats to shoot down Chinese drones, and overall escalation of regional tensions.

Without mentioning the United States, Geng also said other countries must “correct wrong remarks and wrongdoings,” he said.

“Other parties should not be incited, or send wrong signals to make a very few countries go further on the wrong track, which will follow the same old disastrous road and undermine regional and world peace,” Geng said, insisting that China adheres to peaceful development and defensive policies.

The comments were the most forceful by a Chinese government spokesman since Beijing unilaterally declared the ADIZ that overlaps Japan’s air defense zone and covers the Senkakus, which China calls Diaoyu.

Of course, the US has already seemingly capitulated to China, who owns us, by telling American Airlines and others to submit and comply with the ‘so-called’ Chinese air space demands. In essence, hanging our allies Japan and South Korea out to dry and at the mercy of the Chinese communists. It’s a complete turn around from Obama’s previous stance of supporting Japan on this issue, invoking defense commitments under the U.S.-Japan defense treaty.

This weakness and now capitulation to China is drawing strong rebuke from leaders:

“In an obvious attempt to placate China, the United States is sacrificing the assurance to our allies in the region that we are a reliable and steadfast security partner,” Sen. James Inhofe (R., Okla.) said in a statement to the Free Beacon.

Inhofe noted that 2012 marked the 60th anniversary of the U.S.-Japan defense treaty.

“The belated invocation of our treaty obligation clearly falls well short of an appropriate response to this latest provocation by China that would be consistent with the spirit and intent of the treaty,” Inhofe said. “Unfortunately, this follows a pattern of fumbled reactions by the Obama administration in other regions of the world, especially in the Middle East and North Africa.”

“I am glad to see that China’s blatantly aggressive actions aren’t affecting how the U.S. military conducts operations in the region, and I’m pleased to hear that U.S. military flight operations are continuing as planned,” McKeon said in a statement.

“It’s important the United States stand with its long-time treaty ally, Japan, against this kind of international bullying,” McKeon said. “I encourage Vice President Biden to call on Beijing to retract this antagonist claim during his visit there later this week.”

Of course, Biden (with a spine of molten steel) declared how concerned the US was over this. He blathered on about ‘accidents’ and ‘miscalculations,’ but not a peep about war which this could very well result in. Don’t want to commit to that now, do we? I mean they are just allies — China, after all, is our banker.

“If you’ll forgive a personal reference, my father had an expression. He said, the only conflict that is worse than one that is intended is one that is unintended. The prospect for miscalculation mistake is too high,” Biden said.

But not too high to do a damn thing about. What a weasel. Scratch two more allies. I think the US is down to about — let’s see – zero.

China could also poke the badger further by announcing another air defense zone over the South China Sea. That would really hack off Vietnam, the Philippines and other states. Looks to me like China is just itching for a conflict. They feel emboldened and are starting to play global RISK for real, by taking over more airspace and by de facto, countries as well. China is calling for Japan to “correct mistakes” in the air zone. In other words, surrender the space to us, or we will hit Japan. This is not a game folks. This is the foreplay of war and we are definitely involved here. China is not going to back down on this. Period.

China is claiming self-defense over this, but we all see this for what it is… a move to conquer and take over countries and extend power. What? You thought war was passe?

“The U.S.’s stance of feigning fairness while actually backing one side between China and Japan seems established, but if Biden’s tricks in Japan go too far, this will seriously affect the atmosphere of his next visit to China,” the newspaper said in an editorial.

“The confidence of Chinese society is declining on whether the U.S. and Japan really have no intention to provoke a war in the western Pacific.”

Earlier on Nov. 27 Global Times warned that “maybe an imminent conflict will be waged between China and Japan.”

“We should carry out timely countermeasures without hesitation against Japan when it challenges China’s newly-declared ADIZ,” the newspaper said. “If Tokyo flies its aircraft over the zone, we will be bound to send our plane to its ADIZ.”

“If the trend continues, there will likely be frictions and confrontations and even tension in the air like in the Cold War era between the U.S. and the Soviet Union. It is therefore an urgent task for China to further train its air force to make full preparation for potential conflicts.”

Much of this also goes towards commercial benefit. As Russia is doing the same, China is making moves on gas and oil reserves.

According to military sources in Taiwan, China’s next move in the East China Sea will be challenging the middle line dividing China and Taiwan along the 100-mile wide Taiwan Strait. China will most likely press Taiwan to permit civilian flights to cross the middle line. It’s a move to take Taiwan over and a definite move towards war.

China feels she owns the US and in many respects, at least economically, she does. She is threatening any and all who stand in her way. Witness what was said to Britain[4] just this week:

But a leading state newspaper launched an attack on Cameron Tuesday, saying Britain should recognise it is not a major power but “just an old European country apt for travel and study” in an editorial under the headline “China won’t fall for Cameron’s ‘sincerity'”.

China has allied herself with a new axis of evil comprised of China, Russia and Iran as well as others who want global power. The US is a weakling now who seems to be content to let dictators and communists run amok, while redistributing wealth, preaching Marxism and actively destroying their own Republic. Our whacky leaders have gone villainous on us and are enabling monsters.

While China threatens military action against Japan, loopy Biden and his Marxist buds declare an emphatic meh and shrug as the Chinese start to make their global move.