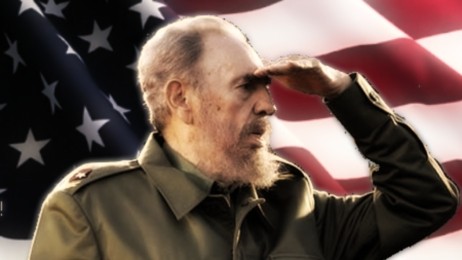 In the fertile, Marxist hellholes that are now our universities, the Cubans are recruiting[2] with zeal. They are pulling in American spies from the Left using a variety of enticements – chief among them… sexual entrapment. It’s easy to entrap and force compliance from somebody who has sins to hide and our colleges are full of such ‘sterling characters.’ People who can’t keep it in their pants and have no moral bearings. The academics and professors are just lining up to join the ranks of communist traitors – a life full of perks, intrigue, treason and eventually incarceration or death.

With the aid and blessings of Barack Obama and his Marxist cronies, Cuba has perfected their infiltration into the US. As spies and influence agents are gathered, Cuba is planning where they go after they graduate or move on to higher positions. They are in effect doing what the Marxist/Progressive Left has already done in America… they are looking to place compromised individuals in positions of power and information. A five-page unclassified FBI report[3] gives some details on this tactic being used by the Cuban Intelligence Agency. Our universities have been America’s Achilles Heel for decades and they are ripe for this type of exploitation. With a government that obviously doesn’t prosecute anyone who is treasonous (that’s reserved for patriots), individuals have little to fear in the way of repercussions in the near future and Cuba has everything to gain militarily for themselves, Russia, China and Iran. They will literally be paving the way for war with the gathered intel.

In the report, the FBI states the obvious, that those already sympathetic to communist or Leftist ideology would be more than willing to assist their Comrades from Cuba. They don’t see themselves as traitors (which they are), but as freedom fighters furthering their beliefs and shared agenda. An agenda which has been promoted for over 100 years in America — Progressivism — or, more plainly, the conversion of a free republic to a totalitarian state.

For years politicians, from the Left primarily, but some on the Right as well, have taken junkets to Cuba. Enticements to align with the dark side are numerous: the promise of lucrative business deals in a post-embargo Cuba, lavish trips, lots and lots of money, sex, drugs and the ever-alluring promise of power. Those that just can’t control their libidos in Cuba and go for a dance in the sheets, tend to get photographed and blackmailed into working for the Castros. You can catch a lot more than a disease by knocking boots in Cuba it would seem. Here’s a hint… if a beautiful woman or an exquisite man approaches you in communist paradise and looks to seduce you, it’s probably not your glamorous looks or sexual prowess that attracted them. Spies use sex as a lure and many of these people get hooked. Vanity and lust goeth before a fall. Just sayin’.

Our Marxist Administration isn’t the only one planting and pushing propaganda in the US these days. The Cubans, the Russians and the Chinese are all promoting forms of it here. They use their influence agents, their spies, their sycophants and their useful idiots to carry out a communist campaign that is worthy of Goebbels.

Recruits, knowingly and unknowingly, are pushed towards positions in government and the intelligence community. Our government and alphabet agencies are rife with them. It will take a very strong movement to clean all of them out and right our Republic and it won’t be easy or pretty. In the end, it may not even be Constitutional.

The Cubans do not limit recruitments to “clandestine agents,” the report said. Other people who do not have access to secrets are co-opted as spies because of their political position or political views that can be exploited for supporting Cuban goals, either as open supporters or unwitting dupes.

“Some of these individuals may not be told openly that they are working for the [Cuban intelligence service], even though it may not be too hard for them to figure out,” the report said. “The relationship may openly appear to be a benign, mutually beneficial friendship.”

“College campuses are seen as fertile grounds for the recruitment of the ‘next generation’ of spies,” Simmons said. “Cuba heavily targets the schools that train the best candidates for U.S. government jobs, like Georgetown University, Johns Hopkins University, and George Washington University.”

One goal of the Cubans is to recruit students prior to federal employment, a method that allows Havana to direct a recruited agent into targeted key spy targets, like Congress or the FBI, Simmons said.

“A preferred target are ‘study abroad’ programs in Cuba, as participating students are assessed as inherently sympathetic to the Cuban revolution,” Simmons said.

Many of the spies planted here in the US have been written on by my friend, Trevor Loudon[5]. There have been 25 uncovered since 1960 and many more who were never outed. These include those such as former CIA officer Philip Agee[6], who defected and worked closely with both Cuban intelligence and the Soviet KGB starting in 1973.

Another, was Ana Montes[7], a senior analyst who worked in the highest levels of the US intelligence and policymaking communities. She was a financial supporter of the Ella Baker Center for Human Rights[8] in Oakland, California. She is now serving a 25 year stint for her ‘clandestine activities.’ She was recruited by Cuban intelligence in 1984 while a student at the Johns Hopkins’ School of Advanced International Studies (SAIS), where she was a graduate student and had voiced her hatred of the then-Reagan administration policy of backing anti-communist rebels fighting the Sandinista regime in Nicaragua. Another spy, Marta Rita Velazquez, who worked for the US Agency for International Development, recruited her at SAIS. Velazquez fled the country after Montes was arrested in 2001.

Two others who gained notorious stature over Cuban spying, were Walter Kendall Myers, a State Department Foreign Service contractor who worked for Cuban intelligence from 1979 to 2007, and his wife Gwen Myers. Both were inducted after visiting exotic Cuba. Walter Myers was a Leftist who criticized “American imperialism” in a diary entry after visiting Cuba. He held a top-secret security clearance and in 2010 was sentenced to life in prison after a conviction for spying. What? you never heard of any of these? Of course not… communism is dead, didn’t you know? Not so much. It is alive and thriving on American soil unfortunately.

A great deal of the FBI report comes from a former Cuban officer who defected in 1994 — José Cohen, a former officer of the Cuban Intelligence Directorate or better known as the DGI.

The Cubans especially love universities in Washington, DC and New York. Those universities are close to Cuban intelligence posts. Courtesy of an informant comes an example of the recruitment effort:

“The Cuban intelligence officers located at the Cuban Mission to the United Nations in New York, New York, or the Cuban Interests Section in Washington, D.C., obtain a published work by a specific professor or student … from a university the [Cubans] are monitoring,” the report said.

A Cuban control agent in Havana studies the work and works together with a co-opted Cuban academic and together the pair analyzes published material and forms a plan of action that may include a personal letter to the targeted individual in the United States.

“The letter will suggest a ‘genuine’ interest in starting a friendship or contact regarding the topic of the article,” the report said. “The personal letter becomes a pretext for the Cuban intelligence officer stationed in the United States to use for initial contact with the targeted individual.”

A Cuba spy posing as a diplomat develops a relationship with the academic that can last months or years of assessing motivations, weaknesses, and current future and access to information.

In some cases, the Cubans use compromising video or audio and sexual entrapment to develop U.S. spies.

“Ultimately, when the time is right, the plan will be executed and the targeted individual will be approached and formally asked to help the government of Cuba,” the report said.

Doesn’t it just make you want to run out and let your child attend a university? Exciting, huh? Targeted schools include, inter alia, Georgetown University, Johns Hopkins University and George Washington University. You gotta give credit to the Cubans[9], they may be broke, but they are crafty and recruiting the brainwashed, ill-informed youth and academia of America who are easy pickings these days. But they aren’t alone and don’t be fooled… this is going on in virtually every college and university out there. The Russians and Chinese are experts at this.

As Cuba, Russia and China troll the American Left for spies and influence agents, so does our government[10]. They are Comrades in arms with very, very similar agendas. It’s hard to tell friend or foe these days — but if they are a Leftist, you can bet they aren’t America’s friend. There are many spies among us and this country desperately needs people willing to say so. A new Venona Project[11] anyone?