I hear this over and over when Muslims are caught committing acts of terror or they are trying to join a terrorist group[1] such as ISIS… not my son, brother, father, friend, daughter, husband, wife, mother… They all were such nice people, so normal… just like your neighborhood psychopath. It’s also reprehensible that the informant was paid $12,000 for being a snitch – but getting the truth is expensive I guess. If you try and join ISIS, then you might as well be ISIS. And when people within your supporters threaten to massacre those holding the ones that want to join the likes of ISIS, well, it just furthers my point on a deranged social mentality. It seems to be the norm in these Somali communities to go for violence first rather than follow American laws. 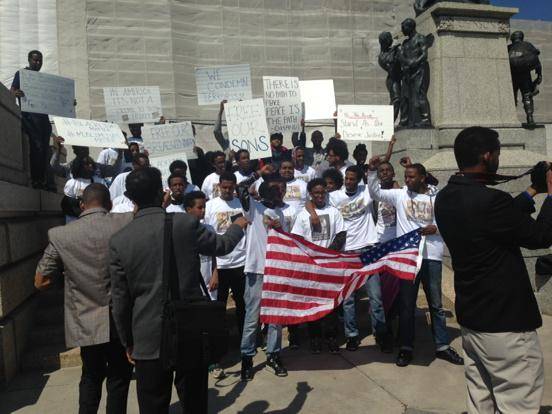 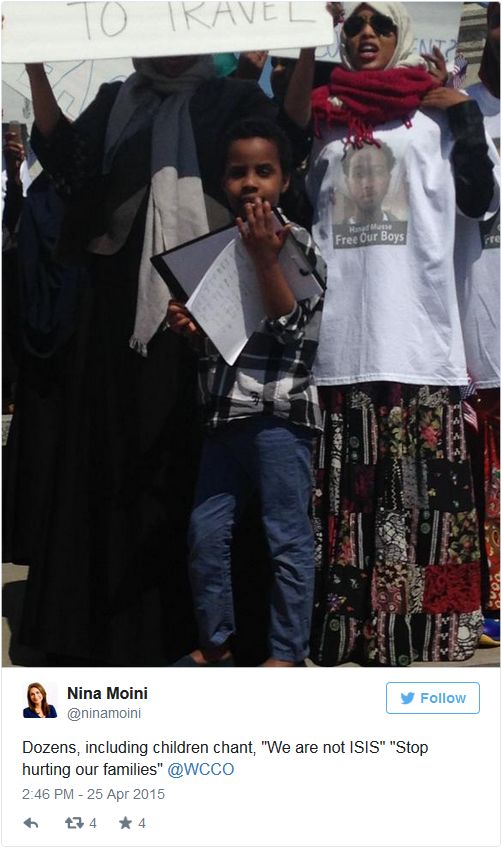 Dozens of Somali Muslims rallied[2] at the Minnesota State Capital on Saturday in support of[3] the six Islamists charged with suspicion of trying to join ISIS.

The protesters chanted[4] “Islam is Peace” and “Free our bros” outside the state capital.

Dozens of local Somali families gathered at the State Capitol Saturday afternoon, calling for the release of six terror suspects.

They’re calling for the government to stop what they see as attacks against them, and say the suspects were set up.

Six local Somalis were charged this week with trying to leave the country to join the terrorist group. These four men were taken into custody in Minneapolis a week ago. Two others were arrested in San Diego.

Federal agents also arrested Mahamed Said for allegedly making threats on Twitter in response to the arrests. One tweet from his account said if the men weren’t freed, there would be a “massacre.” Another message said “Best believe I’m gonna kill for those guys if they don’t free my brothers.”

The leadership and families at Saturday’s rally denounced any retaliation because of the arrests and asked for the public to hold judgment until their sons are found guilty or not guilty.

These Somali transplants in Minnesota know darn well who is recruiting in their neighborhoods. They show up to protest with their #BlacklivesMatter signs and snuggle in with the likes of the Nation of Islam and the New Black Panther Party. That really makes them look peaceful and innocent. Just sayin’. These are not victims and they are not oppressed. Many that have come here have terrorist ties and are violent jihadists. They live by Sharia Law. The Boston Marathon Bomber’s mother also claimed he was set up and wasn’t a terrorist. It’s a meme with these people. You know what would keep the youth from being recruited by terrorists? Morals, ethics and American laws… and perhaps the threat of imprisonment and deportation. The community organizers can ponder that.