There has been a horrific terrorist attack in Paris.[1] I have friends and clients there and am trying to stay on top of this. 60 are dead and 100 hostages have been taken. France has closed her borders and the military has been deployed. France and the UK are on high alert for more attacks. The hostages are being held at a stadium where an American heavy metal band had been playing. I believe it was Eagles of Death Metal from Palm Desert. Hollande has directed all Parisians to stay home and off the streets. There is a curfew in effect. ISIS was quick to applaud the attacks on Twitter. There were at least three explosions at the Stade de France in Saint-Denis. Attackers were executing people with AK-47s. There were three separate attacks. Our prayers are with the French this evening. The world is on fire and I am sure this is a coordinated attack by ISIS. 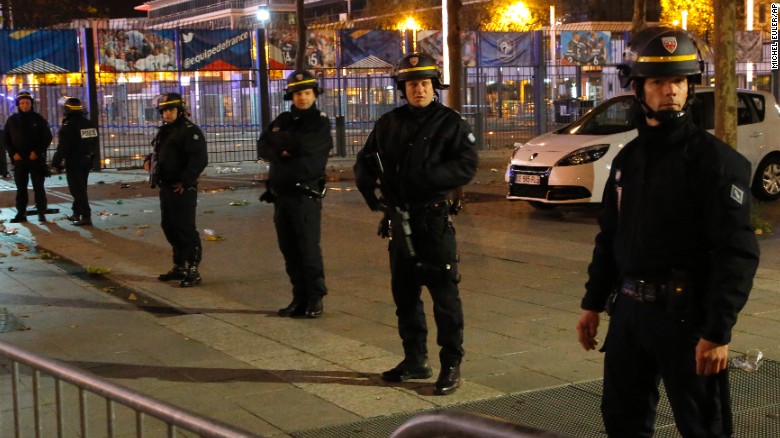 Paris (CNN)Dozens of people are reported dead after a series of what appear to be coordinated attacks across Paris late Friday. A hostage situation is continuing at a concert hall. CNN will update this story as information comes in:

• French President Francois Hollande, in an address to the nation, said he had declared a state of emergency, meaning borders will be closed. “We have to show compassion and solidarity and we also have to show unity and keep our cool. France must be strong and great,” he said.

• The Paris prefecture of police is instructing residents to stay home. The prefecture said via Twitter that people should stay inside “unless there’s an absolute necessity.”

• French authorities have launched a terrorism investigation, Eric Pelletier, a reporter with Le Pariesien, tells CNN Paul Cruickshank. There has been no official claim of responsibility, though ISIS has applauded the attacks on Twitter, Cruickshank reports.

• “This is an attack not just on Paris, not just on the people on France, but an attack on all humanity and the universal values we share,” U.S. President Barack Obama said at the White House. He called the attacks an “outrageous attempt to terrorize innocent civilians.”

• At least 60 people have died in the attacks, CNN affiliate BFMTV reported. 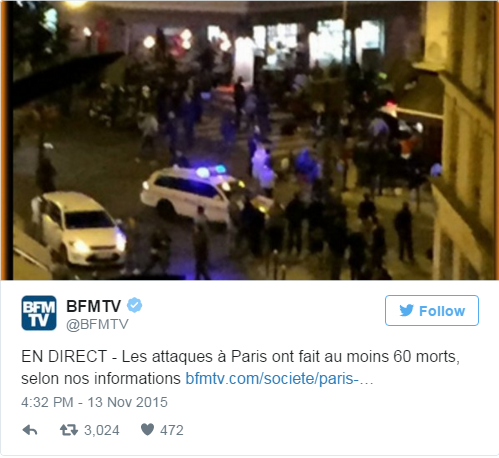 • At least six shootings took place in Paris and three explosions took place at the Stade de France in Saint-Denis late Friday, CNN affiliate BFMTV said. Two or three gunmen entered the Bataclan concert hall while opening fire on law enforcement, BFMTV reported. A source earlier told CNN there were six to eight hostage takers, citing a person they were talking to inside the venue.

• A CNN producer who is at the Bataclan says that police are firing at a rooftop position near the venue.

• Hollande was evacuated at halftime of the France-Germany soccer match. 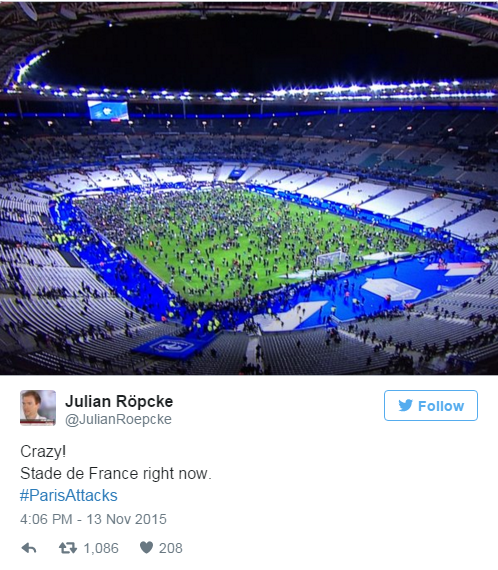 • Hollande, Prime Minister Manuel Valls and Interior Minister Bernard Cazeneuve are holding a crisis meeting at the Interior Ministry to address the attacks in Paris and the explosions in Saint-Denis, according to BFMTV.

• Counterterrorism officials around the United States have convened secure conference calls to try to gather information and to assess whether there is any indication of threats in the U.S, according to two U.S. counterterrorism officials. There is nothing to indicate any threat to U.S. cities so far. Immediate suspicion for the events in Paris falls to so-called returnees — people who have traveled to Syria and Iraq and have returned, the officials said.

There was a lockdown at the Stade de France due to possible explosions, according to French media. President Francois Hollande was at the stadium, watching France playing world champions Germany in a friendly soccer match, but he left to go to the Interior Ministry.

Police were outside the scene of one of the shootings, a restaurant in the 10th District.

Lylia Melkonian, a reporter for France 2, told CNN the neighborhood has many restaurants that were packed with patrons. Melkonian said authorities were evacuating the area.

A witness told BFMTV that firefighters were on the scene to treat the injured.

In early January of this year, two gunmen attacked the Paris offices of the French satirical magazine Charlie Hebdo, killing 12 and wounding 11.

Said and Cherif Kouachi wanted to punish the magazine for the publication of cartoons that they believed mocked the Prophet Mohammed. The Kouachi brothers two days later were shot and killed in a standoff with police in Dammartin-en-Goele.

Amedy Coulibaly, an associate of Said and Cherif Kouachi, attacked a Jewish grocery store in Paris, taking more than a dozen people hostage and killing four. Coulibaly had killed a policewoman the day before, on January 8. Coulibaly was killed when police stormed the kosher market.

Gunmen entered two different restaurants and killed people at will. The third location was the concert/soccer stadium. There is also the ongoing hostage situation at the stadium. Paris is under siege.[5] “There are lots of dead people,” said a witness believed to have been at the bar of a restaurant that was the scene of one attack. “It’s pretty horrific to be honest. I was at the back of the bar. I couldn’t see anything. I heard gunshots. People dropped to the ground. We put a table over our heads to protect us.” A gunman at one of the attacks, at Petit Cambodge, a Cambodian restaurant in the city’s fashionable 10th arrondisement, was heard shouting “This is for Syria!” as he sprayed gunfire at horrified patrons, witnesses said. Economist columnist Jeremy Cliffe tweeted about the concert hall/stadium attack, “some escaped, describing pools of blood and attackers using pump-action shotguns against the crowd inside.” The attacks spanned at least two Paris districts, the 10th and 11th arrondisements. The 10th arrondisement is a cosmopolitan district lined with restaurants and cafes. It is also the location of the two famed train stations Gare du Nord and Gare de l’Est. The 11th arrondissement is located on the Right Bank of the River Seine and is one of the capital’s most populated urban districts, with nearly 150,000 residents. Travel may be limited out of France. No known threats to the US are active at this point. One attacker has been arrested and has told the police, ‘I am from ISIS.’

UPDATE[6]: At least 100 people reportedly have been killed by gunmen inside a Paris concert hall. Two gunmen have been killed, one is in custody. At least 40 other people have been killed in several coordinated attacks throughout the city, with the death toll expected to climb. French President Hollande has declared that France is now under a state of emergency.