Female Marines Can’t Complete Physical Training Tests, But Will Be Sent To The Front Lines Regardless

I have a confession to make: I’m not against women serving on the front lines. : There are plenty of women who can kick butt, BUT they have to be able to pass the physical training tests. : No special treatment, no dumbing down of standards; if they want to be like the men serving on the front lines, they’re going to have to pass the same physical training requirements — end of story. : Well, that doesn’t seem to be the case.

Starting Jan. 1, every woman in the Marines Corps was supposed to meet a new physical standard by performing three pullups. But that has been put off.

The Marine Corps announced it quietly. There was no news conference – just a notice on its social media sites and an item on its own TV show, “The Corps Report.”

Lance Cpl. Ally Beiswanger explained that the pullup test had been put off until sometime next year to gather more data and “ensure all female Marines are given the best opportunity to succeed.”

So far, female Marines are not succeeding. About 55 percent of female recruits tested at the end of boot camp were doing fewer than three pullups; only 1 percent of male recruits failed the test.

The three pullups is already the minimum required for all male Marines. Now the Marine Corps has postponed the plan, and that’s raising questions about whether women have the physical strength to handle ground combat, which they’ll be allowed to do beginning in 2016.

Marine officers would not talk to NPR on tape. They said they delayed the pullup requirement to avoid losing not only recruits but also current female Marines who can’t pass the test.

For years, female Marines have had to meet a different standard – an exercise called the “flexed arm hang” (holding one’s chin above the pullup bar for at least 15 seconds).

But beginning in 2016, women in the Marine Corps and Army will be allowed to serve in infantry, armor and artillery units. And they’ll need to be strong enough to climb those mud walls and carry ammunition.

Maginnis just wrote a book called “Deadly Consequences: How Cowards are Pushing Women into Combat[2].”: He says the issue has more to do with politics than protecting the nation.

This is why politicians in Washington lusting to enact some social change shouldn’t play around with the military. : If the women can do it, let them serve in combat situations, but if they fail the basic physical training test; it goes without saying that they shouldn’t be on the front lines. : At the same time, feminists should finally begin to understand — given the dramatic gap in the fail rate between male and female recruits — that biology is a factor; men and women are different. : Mind. Blown.

Now, the flip side of this happened during the Truman administration when he desegregated the armed forces in 1948. Our armed forces remained intact and became stronger than ever. : Yet, it was between men, only skin color was the divisive factor. : It’s different when it comes to simple biology. :

Again, if women want to be on the front lines, I support them in their effort. : But there are physical standards that have to be met in order to get there. : There can’t be any special changes.

And if this does turn out to be an irresponsible exercise behalf of the Obama administration to satisfy its feminist base — and their absurd notions about biological sameness — then it’s another stupid policy initiative he can add to his resume. 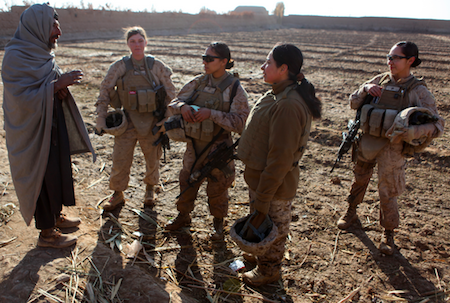