David Eubank is a true hero.[1] He is 56 years-old and is the founder of the Free Burma Rangers. They help pro-democracy groups in conflict zones such as Mosul, Iraq. Their relief teams are highly trained and mobile groups of men who have experience in the field. Many are ex-military. They deliver food, clothing, water and medical aid to those they encounter. Eubank is a former special forces operative, turned aid worker. He was caught on camera saving a five year-old little girl in Mosul from ISIS.

As Eubank and his team were sizing up the area, David spotted a pile of dead bodies. What he saw next made his blood run cold. A five year-old girl and a toddler were still among the deceased. Without a thought for his own safety, David ran and grabbed up the little girl and brought her back. It was caught on video. His teammates laid down cover fire while shots rang all around David as he sprinted for both their lives. He went back for the toddler and never found the child. One other man they tried to help unfortunately died. 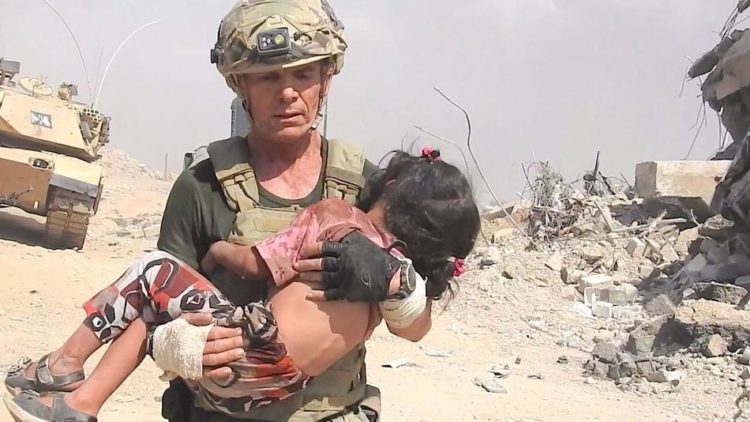 From the Los Angeles Times[3]:

The Iraqi troops Eubank was embedded with coordinated with the U.S.-led coalition to drop smoke canisters to shield the rescuers from the snipers’ view. Eubank and others crept up on foot behind an advancing tank, bullets pinging all around them as they got closer to the wounded civilians.

“Then the Americans dropped the biggest barrage, the most perfect wall of smoke I’d ever seen,” Eubank said.

His team was yards away from the girl, and there still “was shooting everywhere.” But it was now or never.

“I thought, ‘If I die doing this, my wife and kids would understand.’”

Eubank is a husband and a father of three. He had brought his entire family to Mosul to volunteer. They have since returned to the US, but David is considering another mission. David joined the First Special Forces Group when he was only 18. Ten years later, he answered a calling and he needed “the freedom to go where God was leading.” A Burmese Bible group asked Eubank’s Christian missionary parents for help and they turned to their son. “The Burmese said they were a warrior people, and they needed someone like that. My parents called me up and asked what I thought,” Eubank said. “I figured I could go and even if I helped only one person, at least they would be happy and I would be happy.”

David thought when he ran to get that little girl that he could die in Mosul that day… but his family would understand. That’s a devout and brave Christian. Eubank and his wife Karen moved to Burma full time where he founded FBR. For the last two years they have turned their attention to the victims of ISIS. They have deployed with the Kurdish Peshmerga forces in Mosul and they have delivered aid in places ravaged by Jihadists, such as Syria and Iraq.

“This is one of the starkest and most desperate situations in the world. And with ISIS, it doesn’t feel melodramatic to say it’s evil,” said Hosanna Valentine, 37, a longtime member of FBR. That it is… some of the deepest, darkest evil man has ever seen on this planet. According to David, the work he does is driven by his Christian faith. On the FBR website, Eubank quotes Luke 4:18, which reads: “He has sent me to proclaim freedom for the prisoners and recovery of sight to the blind, to release the oppressed, to proclaim the year of the Lord’s favor.”

“I believe God sent me here, and I don’t think about security … but I always ask myself if I’m doing it out of pride,” he said. This is a good and courageous man. We need many more like him in this war. It’s the real meaning of: “If it just saves one more…” Bless David Eubank and those working with him. 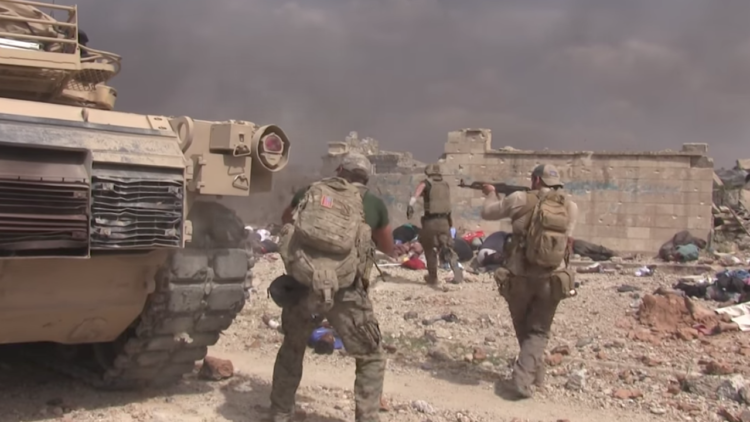