How Progressive: Obama Nominates Openly Gay Civilian Secretary to Head Up US Army

Eric Fanning’s gayness is not the point[1], except in as much as it builds Obama’s image. It isn’t about what is good for the country, or the military… it is about what is good for Obama’s legacy. This is completely consistent with what a narcissist would do. He has two objectives for his legacy… raising a generation who will adore him and doing deeds that they will adore. Frankly, I don’t care what Fanning’s personal preferences are. I do, however, care about the perception that our military is weak and immoral. So many gays and transgenders are now getting openly favored treatment over other personnel. The same goes for favoring those who are secular as opposed to religious. Broadcasting someone’s sexual preferences is a breach of security as far as I’m concerned. It can be used to get to that person and should not be used as a political propaganda tool. More of the same from the Progressive Leftists of the Obama Administration. 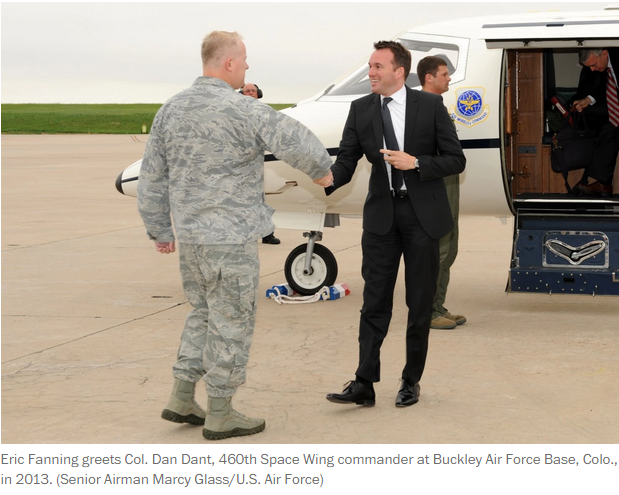 President Obama, in a historic first for the Pentagon, has chosen to nominate Eric Fanning to lead the Army, a move that would make him the first openly gay civilian secretary of one of the military services.

Fanning, 47, has been a specialist on national security issues for more than two decades and has played a key role overseeing some of the Pentagon’s biggest shipbuilding and fighter jet programs. Now he will oversee an Army that has been battered by the longest stretch of continuous combat in U.S. history and is facing potentially severe budget cuts. It’s also an Army that after a long stretch of patrolling Iraqi and Afghan villages is searching for its postwar role in protecting the nation.

Fanning’s nomination, which must go to the Senate for confirmation, reflects a major shift for the Pentagon, which only four years ago prevented openly gay troops from serving in the military. The policy didn’t extend to civilian leaders, such as Fanning.

His long tenure in the Pentagon and his breadth of experience in shepherding some of the department’s most complex and sensitive weapons programs was a key factor in his nomination for the Army’s top job, administration officials said.

“Eric brings many years of proven experience and exceptional leadership to this new role,” Obama said in a statement.

Fanning’s rise to one of the Pentagon’s toughest and most prominent jobs also reflects the Obama’s commitment to diversity at the highest levels of his administration. During his time in office, Obama has overhauled internal policies to provide federal benefits to same-sex partners, appointed gay men and lesbians to the executive branch and the federal courts and ended the 18-year ban on gays serving openly in the military.

As Army secretary, Fanning will be teamed with Gen. Mark Milley, who took over in August as the Army’s top general, the chief of staff. The two men will assume responsibility for the Pentagon’s largest and most troubled service.

The Army, which swelled to about 570,000 active-duty troops during the height of the wars in Iraq and Afghanistan, has shed about 80,000 soldiers in recent years and plans to cut 40,000 more over the next few years. The planned cuts would shrink the service to its smallest size of the post-World War II era.

In a sign of how much the country has changed in the past decade, Fanning’s sexual orientation seemed a non-issue among Republicans and Democrats in Congress, who were far more worried about the state of the Army.

“There is a real crisis in morale and retention that has developed for the Army over the last several years,” said Joe Kasper, chief of staff to Rep. Duncan D. Hunter (R-Calif.). “The Army needs a leader who will stand up for soldiers, who recognizes war can get ugly and who won’t shy away from the tough issues. If Fanning is that type of person, he’ll be embraced.”

Fanning’s role as Army secretary would give him influence over the selection of the generation of generals who will rebuild the service after the wars. One big question for the Army is whether, in an era of tight budgets, it will return primarily to preparing for heavy combat missions against a big, conventional military, such as the Russians, or experiment with new formations that are better suited to training and working alongside indigenous partners.

“The biggest problem the Army faces is finding its mission, relevance and purpose after the Iraq and Afghanistan wars,” Carter said. “All of the services face it, but the Army faces it most acutely.”

By all accounts, Fanning has a great deal of experience and I don’t think Congress cares one way or the other whether he is gay or straight. But I think Obama is using it as a political message. In a military that Obama has aggressively gutted and de-fanged, we have much more pressing matters to address. I just hope Fanning is the right guy for the job. The Army needs to be rebuilt and reequipped for battle, which is unlikely under Obama’s lack of leadership and will. The nomination comes at a time when the Obama Administration is working to eliminate barriers to military service based on sexuality or gender. Fanning’s praises our being sung all over the place, but I don’t think he’s actually ever served in the military. More emphasis is being put on diversity and sexual orientation than fighting our enemies and keeping us safe with battle-tested leadership. That is a recipe for chaos and war.